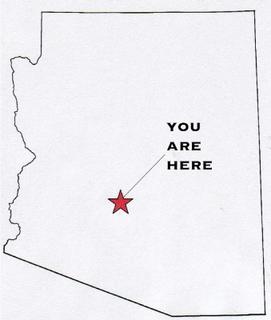 The primary focus of this blog is to highlight some of the talented musicians and bands from Arizona, a state that, at times, lags in its suppport of local music. To that end, I’ll regularly post about bands/musicians/DJs (with music) from the state, past and present. From Flagstaff to Phoenix to Tucson and points in between.

But, first, a little background (which in no way is meant to be an all-encompassing history): The scene in Phoenix/Tempe — and the rest of the state for that matter — probably isn’t unlike most cities. There are bands that have “made it” commerically (Jimmy Eat World, DJ Z-Trip and, going back a few years, the Gin Blossoms and the Refreshments), bands that have been on the brink (Gloritone, Dead Hot Workshop) and others that have had success to the chagrin of the majority (we apologize for Trik Turner).

The talent is diverse, but the support is typically slow to follow. It’s hard to pinpoint the exact reasons. Apathy is as good as any. Of course, we all know the influence of radio and MTV, so familiarity — or lack thereof — enters the equation.

Tempe, home of Arizona State and a lot of the Valley’s music activity, always seemed on the verge of national recognition but never quite got over the hump. The cause has been handicapped by the commercialization and big-box takeover of the city. Two of the cities best local-music venues, Nita’s Hideaway and Long Wong’s, a divey spot that gave rise to plenty of bands, were forced to fold.

The momentum, hopefully, is on the upswing. Jimmy Eat World’s success has brought mention of Arizona (Mesa, to be exact) to the masses. Calexico (Tucson) has built quite a following, as well. Two local stalwarts — Kimber Lanning (owner of Stinkweeds Records and Modified Arts and promoter Charlie Levy of Stateside Presents — are helping the Valley’s hip factor, by drawing indie acts like the Mountain Goats, Sufjan Stevens, the Decemberists, to name a few.

I have a personal investment in the scene (which I’ll get to in the next post), but most of all I simply think there are quality bands that deserve a forum. Hope you take the time to give ’em a listen — and I promise: no Trik Turner.

In trying to keep up with Chris at Gorilla vs. Bear, I’m not taking Sunday off (and for the record, a gorilla would win in a landslide).

I’m going to keep the hip-hop rolling here. Last night, we went out with our good friend Jay to a hip-hop night called The Shop. It had been awhile (too long) since we’d done the drinking/DJ thing. The deejays dropped some serious good-time tunes, including some Tribe, 3rd Bass and Black Moon. And so it’s my duty to pass along the old-school vibes.

Enjoy. (On a side note, I’m getting a root canal — ugh — this Thursday. The endodontist told me I could bring my iPod. Any soothing suggestions for a Root Canal Playlist?)

3rd Bass — Wordz of Wisdom
Black Moon — Who Got the Props?
The Bizzie Boyz — Droppin’ It

First off, much thanks go out to Chris at Gorilla vs. Bear and Dodge at My Old Kentucky Blog for lookin’ out for this rookie. I promise Chris — and anyone else interested — an NFL post with my vinyl-to-digital MP3 of the Super Bowl Shuffle when training camps open at the end of July. Be on the lookout, for it also includes the “Extended Vocal Mix.” For the DJs, there’s an instrumental cut, too. If that doesn’t keep you coming back, I don’t know what will. My new circle of cyberpals includes Peter at tmwsiy*, another suffering Cubs fan.

For your weekend shopping:

Fahrenheit 451 — again. By Ray Bradbury. The best, and the inspiration for the name of this site.
Learning How to Die — by Greg Kot. All about Wilco.
Killing Bono — by Neil McCormick. Bono’s former schoolmate retells living in Bono’s considerable shadow.
Bringin’ Down the House — by Ben Mezrich. Card counters take Vegas for a ride. 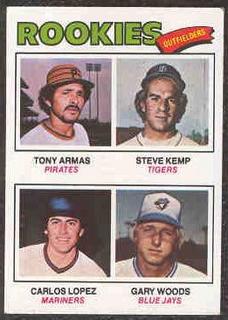 This one is for my boy John, who recently hailed a taxi in Mazatlan. His driver was Carlos Lopez, shown on the attached rookie card. I’d never heard of the guy, but baseball-reference.com says the dude played nearly three seasons (with three teams; not a good sign) and hit .260 in 500 career at-bats. Career transactions include his being drafted by the Mariners in the 1976 expansion draft. Birthplace listed as Mazatlan, which makes sense.

So this one is for John — and Carlos:

Best news of the day: A Transformers live-action movie will be released in 2007, according to this story. The movie will be directed by Michael Bay (The Rock, Pearl Harbor, Armageddon) and Steven Spielberg will executive produce. Go here for the Transformers Web site.

There’s only one problem with this: It’s preying on my nostalgic tendencies, which is exactly the reason I broke down and bought one of the Transformers seasons on DVD. In reality, I think I’ve watched about two episodes. The cartoon is never as good as it was when you were a kid. Yet it never fails when I browse DVDs: I see the Transformers series or G.I. Joe (“And knowing is half the battle”) and I just have to have them, although I flinch at the cost. We pay the price for nostalgia, I suppose.

On that note, anybody remember the wannabe Gobots? Weak.

Check out Del (feat. Unicron, named after a Transformers character, which is actually just Del with his voice sped up) on Worldwide. I thought I had a Souls of Mischief freestyle with an Optimus Prime reference. You’ll have to settle for probably one of the best hip-hop B-sides, Undisputed Champs (feat. Q-Tip and Pep Love).

It’s a shame INXS has stooped as low as reality television to find a singer to replace Michael Hutchence, who committed suicide in 1997. Presumably, Rock Star: INXS, which premiered Monday on CBS, is an American Idol/Survivor-like contest in which 15 contestants are vying to, ahem, make the band. I say “presumably” because I did not nor will I watch; I only know what I’ve read. And I read that Dave Navarro is one of the hosts of this show. Didn’t his 15 minutes expire on that god-awful MTV show where he and Carmen Electra pranced around in fits of self-aggrandizement?

Let’s remember the better times, shall we?

The second half of the baseball season begins tomorrow. Seeing as how the Cubs are 12 1/2 games out of the division lead, all I have to look forward to is Cubs first baseman Derrek Lee’s still-legit chance at the Triple Crown (last won in 1967 by Carl Yastrzemski of the Red Sox.

These two are for him:

Walter Schreifels appears to be mellowing with age, and that’s not particularly a bad thing. Schreifels is probably best known for fronting Quicksand, a post-hardcore (whatever that means) outfit out of New York in the early ’90s. Quicksand’s influence is huge, even if its shelf life lasted two (very good) albums: Slip and Manic Compression.

Rival Schools was Schreifels’ next project, and that died off even quicker than Quicksand: One album (United by Fate circa 2002) and an EP (Rival Schools United by Onelinedrawing) with Far/Onelinedrawing mastermind Jonah Matranga. Rival Schools (love the name) borrowed Quicksand’s aggressive approach, but downshifted from time to time with excellent results.

Schreifels’ newest project is Walking Concert (Some Records), which is really nothing at all like Quicksand or Rival. It’s all pop and shimmery guitars. And the name, according to the band’s bio, derives from the movie Crossroads (the Ralph Macchio Crossroads, not the Britney Spears Crossroads) in which Macchio is a blues-obsessed guitar prodigy; when he gets hold of a pignosed amp, the clerk tells him he’ll be a walking concert. (Coincidentally, my guitar-playing brother Brendan loves Crossroads; again NOT the Britney Spears Crossroads, at least I don’t think.)

Listen to the links to hear the evolution of Schreifels. Rival Schools’ Sweet is a vinyl-only track, which I snagged on the cheap at Amoeba Records in LA. (Forgive any hissing and such in the sound as I’m still mastering the vinyl-to-digital process).

Quicksand
“Thorn in My Side”
“How Soon is Now?” — Smiths cover

I know I said this would be (mostly) about music. But I love baseball and I’d be remiss to pass up a chance to say just how lame the Home Run Derby — er, Century 21 Home Run Derby — was on Monday night. Never mind that I picked the Rangers’ Mark Teixeira in a low-stakes office pool and he flamed out with two — TWO! — home runs in the first round.

Granted, the HR Derby was never to be taken too seriously. But my gripe is with the new format, in which each player was selected to represent his home country — a not-so-coincidental decision by Commissioner Bud Selig that happened in conjunction with MLB announcing the World Baseball Classic tournament. So, instead of four traditional sluggers from the National League and four from the American League, MLB brings you Hee-Seop Choi (Korea) and Jason Bay (Canada, eh). Couldn’t you just feel the excitement??

Worse, was ESPN abetting this farce. Take, for instance, the introductions at the start of the show. Player highlights and stats were flashed as some tragic band (Alter Bridge … who?) was boring the crowd. Teixeira, representing the United States, was shown and his season HR total flashed on the screen: 25 HOME RUNS THIS SEASON (impressive, so why only two in the first round, Mark?) Then it gets to Ivan Rodriguez (Puerto Rico), who has six — SIX!! — HRs this year. To cover up that fact, ESPN simply flashed his career HR total. Which looks better: 256 or 6? Any other year, it would be a travesty, a sham, a mockery — a traveshamockery! — to let someone with six home runs be involved in something called the Home Run Derby.

Canada’s Bay (16 HRs, respectable) proved how ridiculous this new format was, when he went up there — apparently with a hockey stick — and didn’t register a single dinger. Not a one. Nice. Bobby Abreu (Venezuela) might have saved the whole night with his 24 HRs in the first round.

Instead of simply seeing the best power hitters in the game — regardless of country of birth — launch batting-practice lobs some 500 feet into the bleachers, the whole event turned into this flag-waving, our-country-is-better-than-yours joke. Tonight’s All-Star Game better not end in a tie.

My very first post. How, um, historic. I’m a little self-conscious because this seems an exercise in egotism. But, ostensibly, this space will serve mostly as an area to force the will of my musical tastes upon my (few) visitors. Ideally, I will highlight bands and musicians (via MP3s, Q&A’s, etc.) from this fine state of Arizona, as the talent is plenty, if not a little underexposed; consider it my community service.

But I’ll no doubt foist upon you other musical gems. I suppose, this being the first post and all, I should start with a few of my all-time favorites: Run-DMC and A Tribe Called Quest. I know “Raising Hell” (for Run-DMC) and “Low End Theory” (for Tribe) were the watershed albums, but I wore my cassette player out on “Tougher than Leather” and “Midnight Marauders.” If faced with the ol’ desert-island disc conundrum, I’d prefer to be stranded with a copy of “Midnight Marauders.”