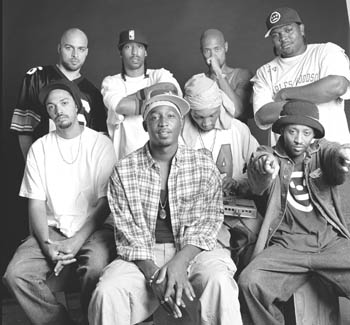 I’ll be chatting with Tajai of Souls of Mischief/Hieroglyphics fame via telephone on Monday morning for an interview for a freelance story to advance a show July 15 at the Clubhouse in Tempe, part of a tour that is celebrating the crew’s 10 years.

I’ve said it before, but these guys really deserve a lot of credit for being pioneers in the independent game. And now the Bay Area crew is dropping a line of jeans – branded, of course, with the famous logo.

I’ve got a ton of respect for what these guys have done and are doing. So I’m excited to talk shop with Tajai, who is the CEO of the Hiero Imperium empire. You’ll be seeing the results of that interview in this space soon.

In the meantime, here’s one of my favorite tracks featuring the Hiero crew and another favorite, Master Minds, that features Tajai and was a B-side to Del’s Phoney Phranchise single. Tajai crushes on it: “I’ll leave that ass twisted like those hicks from Deliverance.”

One thought on “Incoming: Hieroglyphics, July 15”