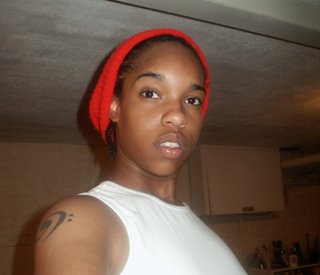 One of the great surprises from the People Under the Stairs show I checked out a couple of weeks ago was opener Psalm One, a Chicago-bred MC who’s about to drop The Death of Frequent Flyer on highly regarded indie hip-hop label Rhymesayers Entertainment.

Is the dearth of female MCs a fact that even needs to be pointed out? I mean, it’d probably be really easy to get righteous about the male-dominated misogyny of the genre (at least among mainstream lines). I suppose, sadly, like in any other profession, some ignorant people will write off a female regardless.

Whatever, I feel lame even bringing all of this up, as singling it out might be detrimental to the point, which is that Psalm One owns the mic. Her set was tight and confident. And we’re talking about someone who studied chemistry at the University of Illinois. Better come correct.

In 2005, URB magazine named her among the Next 100, and with lines like this, from Standbye, an ode to the hassles of flying, who would argue?:

“You can’t be serious, complimentary coupon?/
“Free night’s stay at HoJo up in Tucson?”

Speaking of Tucson (oh, what a segue!), we’re driving down to the Old Pueblo (“Spanish for mud homes,” as one Jim Rome caller once put it) for the Tapes n Tapes/Cold War Kids/Figurines bonanza. I know, I know. There’s a lot of haters out there. Ease up, people. It’s music. Seems the buzz vs. the backlash has become more of the story than the bands themselves, which is killing the spirit of what people love about music in the first place.

2 thoughts on “Psalm One: “The Death of Frequent Flyer””