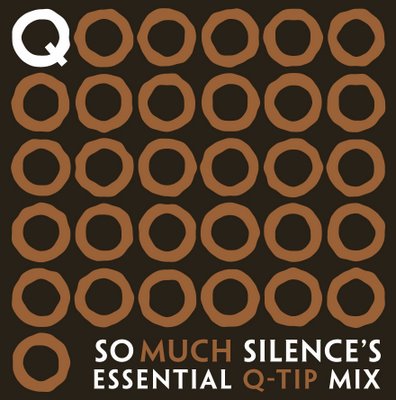 (Garrison Reid created this fine artwork.)
About a week ago, Gorilla vs. Bear tried to help the hip-hop impaired (specifically, Skatterbrain) with a “How Can You Not Like Hip-Hop?” mix. It’s a great idea and it got me thinking about ways I can continue to educate on hip-hop.Apropos of nothing, the first idea I thought of was a mix featuring Q-Tip of A Tribe Called Quest, only my (and whole lots other peoples’) favorite hip-hop group. Back in the day, when I used to trade tapes and mixes on the Hieroglyphics Hoopla message board, one fine gal dubbed me a “Q-Tip Appreciation” mix. I see it as my karmic duty to pass on some of the goods.Now, Q-Tip never will be grouped among the greatest of emcees, but his raspy flow is comfort food for those of us brought up on Low End Theory and Midnight Marauders. (I even found it in my heart to forgive him that ridiculous album cover on his solo debut Amplified. Fur coat? Really?)

In his prime, Tip was all over the place, guesting as a producer and emcee for others; he’s made a bit of a comeback with Tribe’s reunion and a spot on DJ Shadow’s new album (included below). That’s what I’ve tried to compile here – some of his finest cameos.

Twelve tracks. Side A is today. Side B comes tomorrow. This isn’t meant to be all-inclusive, though I think you’ll dig a few of the gems in there (esp. a couple B-sides coming tomorrow).