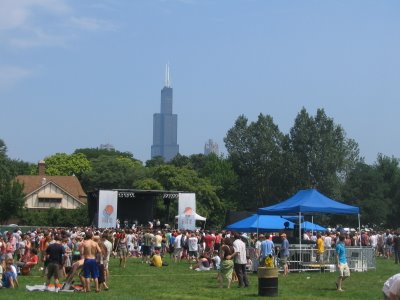 By now, you’ve already seen photos/words from lots of other bloggers on the festival. Annie and I stayed an extra day to spend time with my uncle and take in the Diamondbacks-Cubs game on Monday night at Wrigley Field. Bad news: Cubs lost 15-4. Good news: I caught a foul ball – first one ever! (Top of the third inning, hit by D-Backs catcher Johnny Estrada; ball bounces from the next section right into my hands. By far, coolest moment I’ve had at a baseball game.)

As for the Pitchfork Festival, we had a great time, save for sweating from places I never thought possible. Oh, how good it is to be back in the dry heat of Arizona. The festival was an overload on the senses, including the hipster fashion trends. Eric already touched on the most bizarre trend: the track-star look with oh-so-short shorts. Why? Why, indie hipsters?!?! I like my baggy Old Navy shorts just fine, thank you. Also, if you are going to shed your shirt and force us to look at your ribs, please, for the love of God, drink a milkshake. Being 86 pounds isn’t cool.

Now, there were a few sets I wanted to make sure I’d get close for: Band of Horses, the National, Spank Rock and Tapes n Tapes. In other words, my best (only) pics pretty much came from those bands. I lost the energy and will to fight the crowds to move through the masses.

I’d be remiss if I didn’t comment on the most uncomfortable moment of group/fan interaction: Def Jux rapper Cage, a former drug user who was physically abused by his stepfather, asks who’s ever been abused by their parents, and literally one hand goes up. Cue awkward silence. I applaud Pitchfork for including hip-hop acts (including Aesop Rock/Mr. Lif), but that moment seemed to illustrate the divide separating hip-hop from indie rock.

Band of Horses
Once again, Ben Bridwell proves to be one of the most amiable frontmen around. He’s at ease talking with the audience and, in my third time seeing them this year, his voice held up just as well as it did the first time I saw them in a smaller club. Nice touch by the drummer to wear a Chicago Bears shirt. 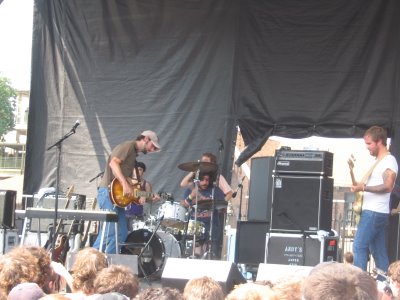 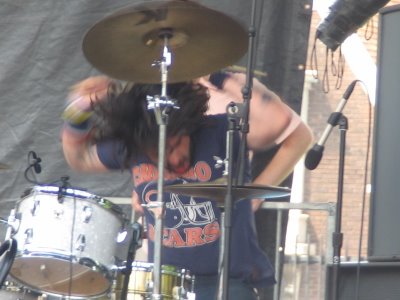 Spank Rock
Let me just say that Spank Rock’s set was the jam. They were passing out beers to the crowd and pouring vodka into peoples’ mouths. By the time it was over, they invited as many people that would fit onto the stage for a little dancing while Spank took to sitting on speakers. It was like the best house party you ever went to; any band was going to have a hard time living up to that set. 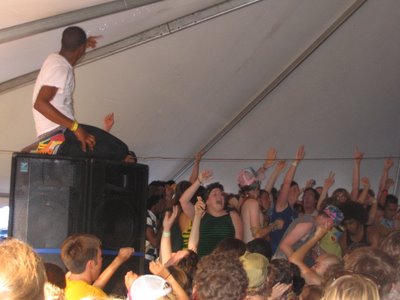 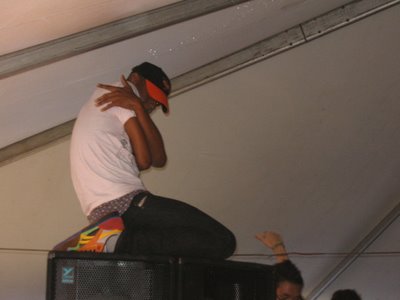 Tapes ‘n Tapes
After I saw Tapes in Tucson about a month ago, I said I thought they would benefit from a second guitarist. I’m starting to rethink that after Sunday’s set. They were loud, driven and inspired to kick off the second day. 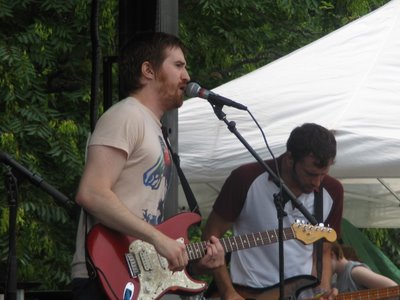 The National
The National played a set heavy on tracks off Alligator (which is fine by me) along with two new songs: Mistaken for Strangers and Start a War, which is either a protest song (my theory) or a track about a torn relationship (my wife’s theory). The chorus, if I heard correctly: “You’re gonna walk away and start a war.” The good news is, my well-placed sources (laugh here) tell me that the band is in the studio prepping songs for a new album. Also, check out new West Coast tour dates, which means I have to travel to LA again to see them. Viola player Padma Newsome (of Clogs) was a fantastic addition to the National’s live sound.