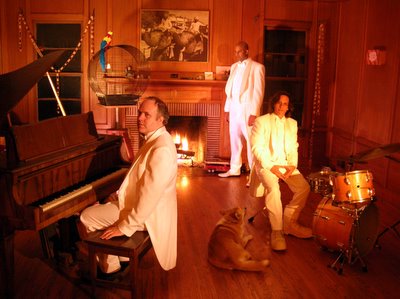 So, I’m not sure if there’s some sort of statute of limitations that must expire before you should post a second time about a band. But I like the Radar Bros. quite a bit, and I posted on them way back in August, around the time I discovered The Fallen Leaf Pages, so I figured it was time to revisit them.

Oddly, the Radar Bros. (on Merge) don’t seem to be blogged about very much, not that that’s some damning statement of their music. But Merge is such a great label (one of my favorites), so I just assumed people would have picked up on them.

Maybe the Radar Bros. aren’t indie enough? Is that even a plausible theory? I don’t know. But I typically find myself helplessly sucked in when I listen to them with their delicate lyrics and sweeping instrumentation. Catchy melodies aren’t readily apparent, but there’s something alluring about that. Their deliberate pacing somehow manages to rein in my quick trigger finger on my iPod. They remind me to slooooow down and enjoy the music.

Here’s a few of my favorites:

And the Surrounding Mountains and The Fallen Leaf Pages are available – as is most of the Merge catalog – at eMusic, so pick ’em up using their free trial of 50 mp3s.

About that live Nada Surf …

Some folks were asking about live recordings from Monday’s Nada Surf show. With the group’s permission, I recorded the in-store performance at Stinkweeds. They asked to hear the files before posting to ensure sound quality and such, which I absolutely respect. I’ll be sending those tracks to them via e-mail. It was a tremendous set of 11 (!) songs.

7 thoughts on “Revisiting the Radar Bros.”