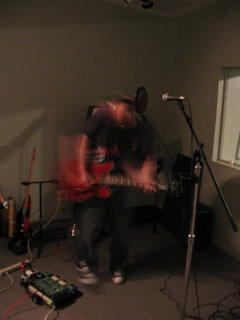 If you got to the end of the previous post (thank you), you read that I had a personal investment in the local music scene. Alas, I begin features on Arizona bands with a logical (if not nepotistic) choice: sourceVictoria, also known as my brother’s band.

Obviously, it’s hard to stay objective on this one. The truth is, though, my big bro, Brendan, was the inspiration for starting this blog. I sent MP3s to a few other blogs, and Dodge at My Old Kentucky Blog posted — twice! (Thanks, Dodge.) But I decided I could help out in my own right because a) Brendan is my brother and b) if he wasn’t my brother I’d still think sourceVictoria is more than worth it. Honest.

That said, I’m stuck somewhere in the middle here. It’s probably unfair of me to compare them to some national act — I’d rather let unbiased ears do that. But here’s the set-up: Brendan (vocals/guitar), Darren Henley (drums), Jeff Livingston (piano/synth), Mike Risch (bass).

What I will say is that I don’t think I’ve seen my brother so driven by any other musical endeavor. Both the songwriting and music are honest; nothing feels contrived. I recently spent some time snapping photos in the studio while they recorded. The guys take painstaking attention: Every note and every beat feels thoroughly thought out. And I do believe that comes through in the music.

I could go on, but I’d rather let the music do the talking, as the cliche goes. These songs can be found on the band’s self-titled EP, available at the Web site. One note: The first track, Opportunistic, was remixed with a new guitar part by Jim Adkins of Jimmy Eat World.

Tell us what ya think.