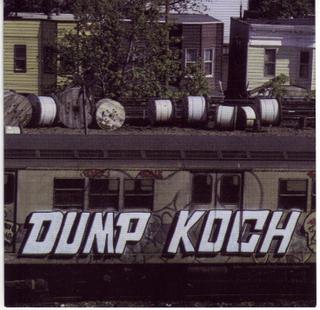 Digging into the crates of Arizona’s hip-hop past, Supermarket is bound to turn up. I can’t believe this album (1996) is almost 10 years old. To me, these guys represented all that was right in hip-hop: fun flows, creative beats, and they never took themselves too seriously.

The group — emcees Fluid, Ruckus and Type O and DJ Jimi the Mantis Claw — formed in 1994. That was about the time I was in college, knee-deep in all things hip-hop: A Tribe Called Quest, De La Soul, Digable Planets … they were all at their peak. And their influence is pretty evident in Dump Koch, named in honor of former New York City Mayor Ed Koch, whose vehement crackdown on graffiti ran contrary to hip-hop culture’s street-art ethos.

Supermarket also takes shots at the bluster of gangsta rap via skits (a la De La Soul) and “covergirl emcees” using all those “verbal cosmetics.” DJ Z-Trip, whose name you’ll see plenty on this site, worked production on the album. This album was great because they repped Arizona to the fullest, with mentions of the 6-0-2 — Phoenix area code, y’all — and, on True Feelings, they name-check “6th and Mill,” the main drag in downtown Tempe. On the same track, Fluid drops the perhaps the album’s best line: “I’m a hypochondriac, all my styles are sick.”

The group quietly dissolved, but last I read the guys reunited for a show in May. Be sure to peep my personal fave Frontal Lobe Piercing, which includes a guest spot from local emcee Puma.

5 thoughts on “Supermarket — “Aisles of styles””