Thanks to Chris, Ben and Eric (um, I think; see below) who have been holding down the fort while my computer was undergoing repairs. We got it back except I think it’s in worse shape now. I can’t get to the Internet and every application I try to open takes forever. The Apple Store “geniuses” will be hearing yet again from me.

In the meantime, our new addition to the family arrived: This bad boy. In white. So we are up and running on this information superhighway once again. 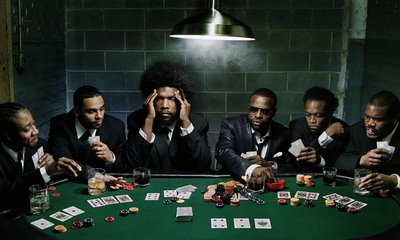 On to the music … I’m pretty sure Analog Giant beat us all to the punch on posting new Roots stuff. But drummer ?uestlove is making a new track, It Don’t Feel Right, available for download at his MySpace. In fact, he’s encouraging everyone to spread the song.

From his MySpace blog:

“im letting you take this song. spread this shit like the flu. make it available on your pages for DOWNLOADING. …

An artist reaching out to the fans … that’s something we should all get behind. I don’t need to tell you how bad-ass the Roots are, right? One of the most talented and consistent hip-hop acts. If you’ve never had the pleasure of seeing them live, I suggest you do. It’s a thorough education in all things hip-hop.

The Roots | It Don’t Feel Right