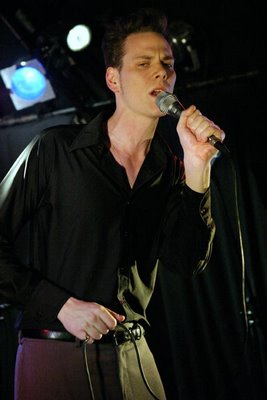 My first impressions of Baby Dayliner probably were not unlike those of most first-timers. We saw him open for the National in Los Angeles a few months ago. As fans slowly filtered in, Baby Dayliner coolly took the stage in a button-down shirt and his styled pompadour, drawing inquisitive looks across the venue.

If I was a skeptic then, I’m sold now. At the least, he piqued my curiosity at that show. But having absorbed his latest LP, Critics Pass Away, I can safely call myself a fan. Critics is an addictive mix of slick production, lounge cool and inspired crooning. On stage, as well as on record, Baby Dayliner carries the bravado of a great pop vocalist – just a hint of swagger that blunts the skeptics.

On the heels of a May release for Critics Pass Away (on Brassland), Baby Dayliner (born Ethan Marunas) took time to answer 10 questions via e-mail for us.

Once you’re convinced, buy Critics at Insound for a chance to be entered in a great contest.

1. We’ll start with an easy one: Who do you consider primary influences?
Baby Dayliner: There’s really so much. Lately I’ve been listening to The Cocteau Twins and The Walker Brothers. I like a lot of 50s and 60s pop music.

2. In a lot of your press clippings, writers seem very intent on trying to draw comparisons between you and just about anybody (Ian Curtis, Frank Sinatra, David Bowie, etc.). Are the comparisons flattering or do they become a burden? In other words, is it difficult to shed any preconceived notions writers or fans may have?
BD: Writers, for the most part, can’t help making comparisons. Writers also never have time to truly absorb albums because of the hundreds of discs on their desks that they’re expected to review quickly. They say this, they say that, but finally there’s some element in my music that always doesn’t quite agree with their comparisons. Whatever it is they can’t define is probably what I would call my “style.”

3. I’ve read that you’ve played in bands. So what led you to go solo?
BD: I was in a band that split up because they couldn’t get along. I didn’t want to wait around for more personnel, so I just programmed a bunch of my songs into a synth/sequencer and started performing alone. It’s come a long way since then.

4. Can you walk us through your writing/recording process? Are you writing lyrics first or creating/producing music before any writing is done?
BD: I usually make a piece of music first. If it really grabs me I’ll then elaborate on it, and register how I react to it emotionally. From there I sculpt the song.

5. When I saw you open for the National in Los Angeles, some people in the crowd (myself included) didn’t quite know what to make of you or your show right off the bat. Does that happen a lot for people unfamiliar with your work?
BD: New crowds can be tough. The people who dislike me are ones who feel I’m trying to con them or something. Because I have no band, they feel like it’s not real music, they feel I’m wasting their time. These people are also often uncomfortable seeing only one guy emoting. If only they could get over that hump, they might see me.

6. In one interview I read, you said that some people in the first couple songs of a set might see you as a phony of some sort. Why do you think people might think that? And do you feel like you have to somehow work harder to convince them otherwise, or does that just happen naturally?
BD: I think I might have just answered the first half of this question. There’s nothing extra I do for a new crowd. If they’re gonna like me, it happens naturally, a few songs into the set.

7. One of my favorite tracks on the new album is Breezy, which has a bit of a hip-hop vibe. And I know you’ve done a little production work for the great hip-hop label Definitive Jux. Are there hip-hop artists out there that inspire your production work?
BD: I grew up listening to hip-hop, and I’m always aware of it. Even top 40 crap. Hip-hop is a big part of my dictionary but I’m not a real thorough fan of it. Certain albums stick out. Nas’ first album. Common’s Resurrection. The first couple De La albums. The first couple Tribe albums. Jay-Z’s whole library, for the most part. I listen to Aesop Rock and Blockhead, who are friends from way back. The new Ghostface album is solid. Gnarls Barkley sounds cool. Dr. Octagon. Big Daddy Kane. Jungle Bros.

8. Unlike a singer in a band, you’re up there by yourself when you perform live. Is it a little unsettling or have you become comfortable when all eyes are on you?
BD: I’m long past the fear. In fact, it’s when I’m looking into everyone’s eyes that I get bolder and less timid.

9. When I saw you in LA, I couldn’t quite make out what you brought on stage — a suitcase of some sort, I think. I’m guessing you’ve got prerecorded loops/beats that accompany your singing in there?
BD: Yeah, the suitcase has all the requisite gear to put on the show. My mic, my set list, and my hurdy-gurdy are all within.

10. What does the title of the new album, Critics Pass Away, mean to you?
BD: Critics Pass Away is about overcoming adversity and making the best of a bad situation, and about trying to live in the moment. It’s about finding meaning inside our heads and through our craft, even if our physical circumstances are not the desired ones.

4 thoughts on “10 questions (via e-mail) with Baby Dayliner”