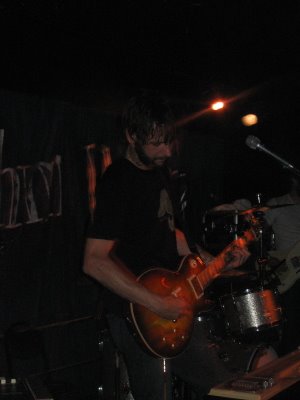 If the increase in size of the crowd at Thursday night’s show compared to a March appearance at the same venue is any indication, Band of Horses is growing in popularity exponentially. Last night’s gig at the Rhythm Room drew roughly 300 people, compared to (and this is a rough guess) about 75 for a date in March. For Phoenix, that’s saying something. The buzz was palpable, and I’m still trying to figure out where it originated (magazines? radio? MySpace?).

The place was so packed we tried to wedge out a little spot for ourselves off to the side. Somehow, we ended up smack dab in the front, close enough to put our finished drink glasses/cans on the stage (sorry, Rhythm Room). Also close enough to get good shots of frontman Ben Bridwell’s neck tattoo. (I’m pretty sure it’s a liger.) 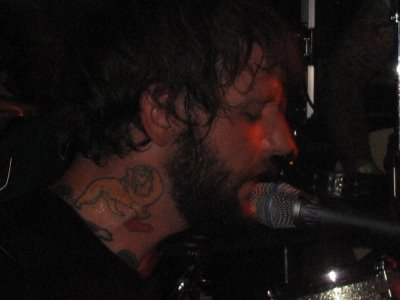 I gotta admit: I was a little disgruntled. Where was everyone in March?!? Ah, but that’s just indie-rock snobbery. A band like this deserves whatever sold-out crowds it draws. There’s not a more amiable and engaging frontman than Bridwell. His chatter in between (and sometimes during) songs is priceless, and he exudes a carefree feeling that there’s just no other place he’d rather be than playing for you.

His gratuitous use of the word “dudes” – “Thanks, dudes!” after about every song – is both humorous and endearing. “We’re just gonna have a good time together, dudes,” he said at the start of the show. And the overwhelming applause from each song made him jokingly cover his ears, as if he didn’t just get the same response the night before. No matter. For one night, Bridwell boasted on Phoenix and took a jab at his former hometown of Tucson, where they played to an apparently lackluster crowd on Wednesday night. (Memo to touring musicians: Phoenicians eat that up every time.)

Whatever, his “dudes” and thumbs-up and hang-loose hand gestures (seriously, hang loose?) make the touring rock-star life seem so appealing. If you don’t wanna be the lead singer of Band of Horses after you see Band of Horses, there’s something wrong with you.

Perhaps predictably, the group saved Funeral (mp3) for last – at least prior to the obligatory encore, in which Bridwell played a new tune solo. He warned that it was still rough: “So don’t go write about it on your blog. I know you have a blog; I can tell from the look in your eye.” What? Who, me?

For Funeral, Bridwell encouraged the crowd to sing along on the “ooooh, ooooohs” leading up to the song’s climax: “Come on, dudes. Stay in tune.” So when he botched a guitar note later on in the tune, he jokingly reminded us mid-song: “Hey f— that; you guys f—ed up the vocals!” 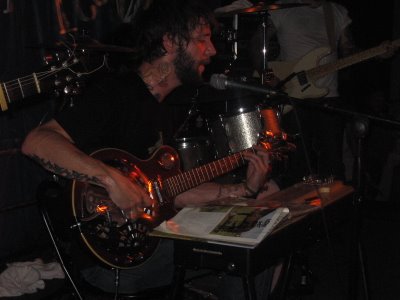 Better were two versions of Wicked Gil: the album version (if you will) and a slower, more romantic rendition for the encore. My wife loves this song, even if she has no clue what the lyrics are (“they’ll be eating people to safety”?) so to have it played twice was gravy.

I bought Everything All the Time on vinyl last night, and I’m convinced it’s going to take a real strong showing from someone to supplant this as my Album of the Year. (And The Great Salt Lake (mp3) as my Song of the Year.)