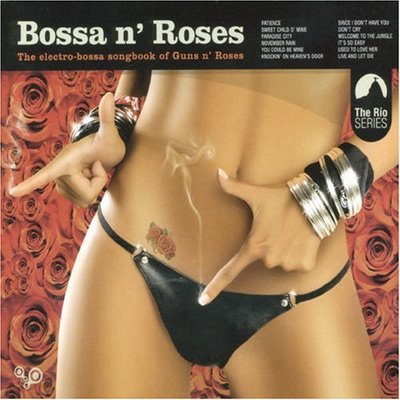 I can’t decide if this is going to be one of the lamest things I’ll ever have posted or, possibly, one of the more unique. (Based solely on the cover, I might be inclined to go with the former. Her fingers … they’re smoking! Guns! And there’s roses in the background. Guns and roses!)

Music Broker’s previous “Bossa N” series – Bossa N’ Stones and Bossa N’ Marley – apparently were huge in Europe. I suppose if you can’t stomach Axl in his original form, this is a little easier to digest. I was actually just out at a bar with co-workers over the weekend, and Paradise City came on. I think I’ve heard that song enough for a lifetime – and then some – so I suppose some creative interpretation of the Guns N’ Roses catalog isn’t a bad thing. I sort of feel numb anymore when old GNR songs (circa Appetite for Destruction) come on: They aren’t good, they aren’t bad. They just exist.

This version of November Rain is calm and loungy and not nearly as epic as the original (oh, how I love that video, though). This is good for background, atmosphere-type music. Probably also a good conversation piece among friends. I’m not going to argue whether it’s actually good or not. As the athletes like to say these days, “It is what it is.”

Stereogum has two more tracks: Welcome to the Jungle and Paradise City.