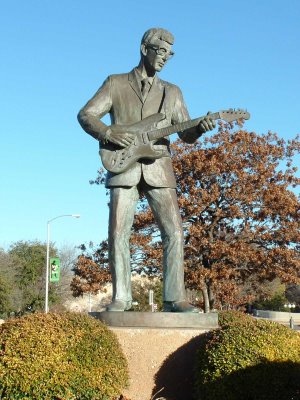 Over the weekend, I picked up one of those cheesy (though very convenient) “20th Century Masters” compilations for Buddy Holly. I’d been wanting to dive into Holly’s catalog, and this seemed like as good a place as any.

As amazing and intricate as some of our current music is, I had an urge to scale back. Not one song on this collection reaches the three-minute mark; True Love Ways at 2:51 is the longest. That seems like an amazing feat, considering the lasting power of Holly’s songs through the years. Less sometimes is more, eh?

Anyway, I’d always been interested in Holly because my dad had (which I now possess) an old Wurlitzer jukebox with at least one Holly 45 in there: Peggy Sue b/w Everyday. To me as a kid, Holly just seemed like one of those artists you pass off as an “oldie”; something only your parents would ever listen to, right?

But then in 2000, I took a job as a sportswriter in Lubbock, Texas, birthplace of Holly. Then I find out that I share the same birthday (Sept. 7) as Buddy. Just coincidences, yes, but enough to stir my interest. I visited the Buddy Holly Center a couple of times, and now regret never bringing a camera or fully absorbing the artifacts in there â€“ lyric books, Lubbock High yearbooks, guitars. It also had on display his eyeglasses recovered from that fatal plane crash, which sort of creeped me out.

Not surprisingly, Lubbock, the “Hub City,” a somewhat barren and isolated locale, takes great pride in being Holly’s birthplace. There’s Buddy Holly Avenue, a Buddy Holly Recreation Area, a Buddy Holly statue (above) and so on. The Lubbock Avalanche-Journal (my onetime employer) has a site dedicated to archived stories about Holly, including a birth announcement mistakenly identifying Buddy as a girl. Oops.

Anyway, I don’t mean for this to be some all-encompassing history or biography. But I imagine many of you won’t ever make to Lubbock, which is just as well (though I will say that the city gets a bit of a bad rap). If anything, Lubbock has produced some great country musicians: Jimmie Dale Gilmore and the Maines Brothers among others. (That’s to speak nothing of one of my favorite albums, Richard Buckner’s Bloomed, being recorded there, with help from Lloyd Maines.)

My guess is the desolation and spartan landscape of Lubbock lends itself to mournful country music. So I’m always surprised when I listen to Holly and the bright guitars and inventive (for its time) instrumentation of his songs.

On Everyday, drummer Jerry Allison produces the procussion line by slapping his knee, and producer Norman Petty’s wife, Vi, played something called a celesta for the chimes effect.