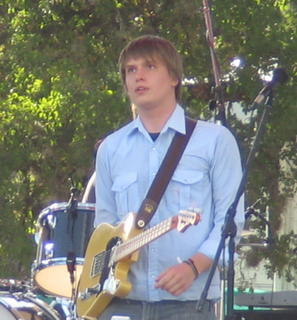 My wife and I just finished watching the Death Cab for Cutie DVD Drive Well, Sleep Carefully. It was good: lots of interviews and great live footage. We have yet to tackle the bonus material, which includes an acoustic set.

A small part of the doc showed Death Cab guitarist Chris Walla at his Hall of Justice recording studio in Seattle, where he recently recorded and produced Nada Surf’s The Weight is a Gift, among others.

Walla blogs on his Hall site and has a few mp3s stashed there as well, including two he just posted on Tuesday. One is The Rhone Occupation, a “superhereo theme song” in honor of Nada Surf. Pretty funny stuff.

He also keeps a MySpace page.