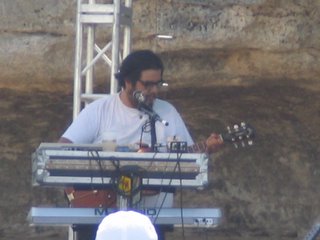 Apologies (and thanks) to Chris, who recently posted on these guys twice (!) and introduced me to Dios at the Austin City Limits festival. Since they’re playing Modified in Phoenix on Nov. 17, I thought I’d do my share to build the interest.

For what it’s worth, I haven’t stopped listening to their new self-titled album for about the past three days. The choruses have a sing-songy quality that absolutely get stuck in your head — you know, the type you’re humming in your head from the moment you wake up and you’re not really sure why. The album definitely has an addictive pull.

I also quite enjoy the writing, which is plaintive and direct.

Wrapping up some loose ends:>> I’ll be buying this today … after I file my TPS reports. Mmmmm, yeeeeeeeaaaah. Kill time at work and play “Ditch Lumbergh” here.
BONUS (kick your feet up and play loudly in your cubicle):
The Geto Boys | Damn It Feels Good to Be a Gangsta

>> If you’re not watching Extras, you’re missing out. Ricky Gervais is a genius. Go get the Gervais and Stephen Merchant Show free, courtesy of UK’s XFM.

>> My fantasy league team in my pay-in league is going downhill fast. I lost Daunte Culpepper to injury and nearly Anquan Boldin. I’ve lost four in a row. And now I have David Carr or Kyle Orton to start at QB. Yikes. Good news is I’m holding second place down in the music bloggers league with a win over Ryan, who prematurely talked smacked earlier in the week. But he’s a Bears fan, so all is forgiven.

>>Cubs need to make serious moves this off-season. Like signing him. And trading him.

>> Jeff Tweedy is preparing to release a second album with his side project Loose Fur and wants to regroup with Golden Smog. Read it here. As if that whole Wilco thing doesn’t keep him busy enough.

One thought on “Dios (Malos)”