I’m long overdue to post on DJ Z-Trip. Yeah, he lives in Los Angeles now, but he cut his teeth in Tempe/Phoenix, and we still consider him one of ours. He’s playing Hollywood Alley in Mesa tonight (I’ll be at work … woe is I) with Connie Price & the Keystones.

I don’t need to tell you what’s going on with Z-Trip now: He released his major-label debut Shifting Gears this year and he’s been touring like a madman. In my mind, he was the forefront of the “mashup” trend; his underground classic with DJ P that never was released, Uneasy Listening, Vol. I, is the benchmark of mashups. (Read a Q&A I did with him earlier this year.)

I was lucky enough to be going to Arizona State while Z was playing weekly gigs in town with his Bombshelter DJs crew: Emile and DJ Radar. These sets were — if I may — off the hook. They did solo sets, dual sets or just went nuts with the 3×6. There was dancing, b-boys, drinks, freestyles. Thems were good times, I tell ya.

In all honesty, Z-Trip is one of my favorite artists — and I use that word in the truest sense. He has a keen ability to bridge genres and fans. Where Radar was the technical wizard on the turntables, Z really brought out the best in the party and the vibe; he’s probably one of the most well-rounded deejays out there.

Being a packrat, I saved a lot of the flyers and such from those days. I scanned ’em in for your viewing pleasure. 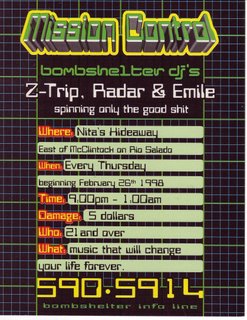