As Chris mentioned Kevin is rockin’ in the City of Angels, so Mr. ‘I swear I’ll post’ is going to step up for a couple of days. 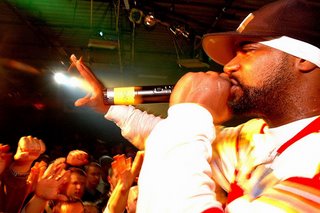 Last night went and checked out the monstrous Ghostface Killah at a local joint, small and intimate enough for Shoalin’s finest to melt my face off.

This will not be an in depth Kevinesque concert review (no playlist), but after settling down and yelling at the ‘Lightman,’ Ghostface launched into a verbal onslaught of tracks from his old records, new release and Wu-Tang classics.

He asked, and surprisingly got from the raucous crowd, ten seconds of silence for O.D.B aka Big Baby Jesus aka etc etc. Then launched into O.D.B’s hit ‘Shimmy Shimm,’ where the crowd screeched out the lyrics.

Overall, a great show, at least until he invited all the ladies on stage for a dance party, reminding of MTV’s great wonder of avant garde The Grind.

Here’s a smattering of solid Ghostface:

Ghostface Killah | The Champ | From the new Fishscale

Prefuse 73 Feat. Ghostface And EL-P | Hide Ya Face | From Surrounded By Silence