Before any talk of the National, I gotta say what a fun time we had hanging out with Justin and his wife Melissa and, of course, Jax. All are fantastic people and I’m happy to consider them friends … like, ones I’ve met in person and stuff.

Also, thanks to Chris for chipping in with the Camp Lo update. And to Royce, who will catch the blogging bug in due time. I expect to see more of him up on this here site, so be prepared.

As for the National … my high expectations were absolutely exceeded. A packed venue (sold out) always makes the anticipation a little more heightened. I’d listened to Alligator so many times, yet what’s great about a show like this is how it makes you revisit the album to listen for something you missed the first time (or hundred times) around. 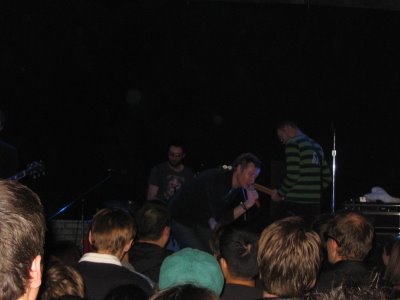 That was the case, for me at least, with Mr. November (mp3). The song quietly hangs around as the last track on Alligator, so I’d been giving it the short shrift. Jax predicted, correctly, the National would play it as the second to last song (before the encore). As our friend Ben said, “It’s the jam.”

It’s like something clicked when I saw/heard it played live. That probably had something to do with lead singer Matt Berninger, who is compelling on stage, if not perhaps a tad dramatic. Either way, his body language is at times spastic and theatrical. At this show, he had a habit of tucking his left hand under is right armpit while his right arm was cocked at a 90-degree angle, mic in hand. 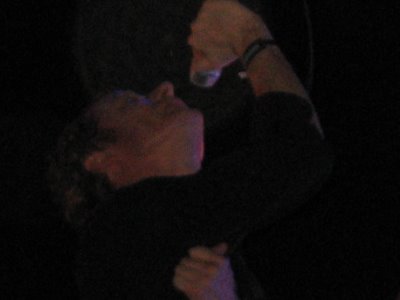 It might have seemed over the top or insincere if he didn’t sing with such charisma. How can you deny these lines in Mr. November?:

Mr. November has the same feel of tension and release as Abel with Berninger’s guttural yells peaking in the chorus, before leveling off just as you’ve reached this internal boiling point yourself. (Never mind that when I first heard the song I thought Berninger was saying, “The warm front is over / I’m Mr. November.” What?!?! I’m an idiot.) 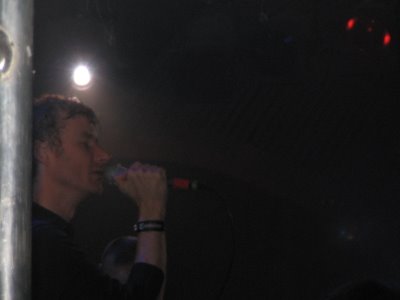 Thing is, though, I’ve attached such emotional ties to the songs of Alligator that it was almost impossible for the National to disappoint me. Is it possible for Alligator to be my album of the year for 2006, too?

(FYI, emusic has added the National’s back catalog.)

Alas, I also need to mention opener Talkdemonic, a two-piece folksy-electronic instrumental duo from Portland, Ore. I’ve said before that instrumental-only music has to work very hard to keep my attention. But Talkdemonic isn’t instrumental for the sake of being instrumental. There are very unique (viola-meets-Apple laptop-meets-drums) compositions at play. It’s easy to imagine these pieces as backdrops to movies, their sound brimming with emotion. 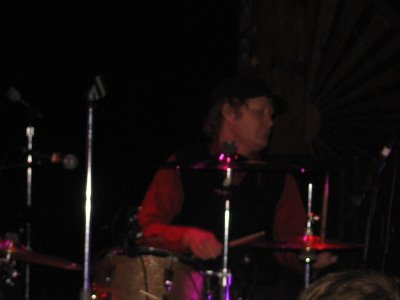 Kevin O’Connor, one-half of Talkdemonic.
Tomorrow’s post will be devoted to the first opener … but I won’t spoil it for you just yet.

4 thoughts on “The National in LA: I won’t fuck us over”