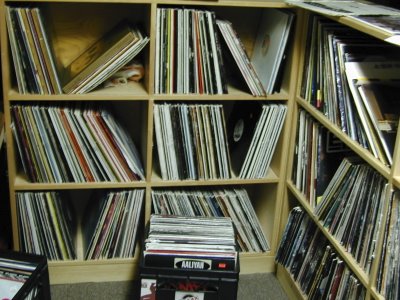 I’ve been overwhelmed/excited this year by the number of superb hip-hop releases (Murs’ Murray’s Revenge and Cadence Weapon’s Breaking Kayfabe among my favorites), quite a turnaround from 2005, when the only LP that really stuck with me was The Craft by Blackalicious. (Though, maybe I wasn’t digging hard enough.)

What’s followed has been more posting about hip-hop than I expected from myself even though I’ve long loved the genre, counting A Tribe Called Quest, Run-DMC, De La Soul, Digable Planets, etc. as mainstays in my collection. I never intended this space to be devoted to one style of music over another, but, as it took shape, a majority of posts seemed dedicated to indie rock and all its variations. That’s probably more a case of my cyclical listening habits than anything. (Though I must have paid just enough attention to hip-hop to be linked by the heads at The Broke BBoys, Analog Giant and Los Amigos de Durutti, all of which have a distinct hip-hop flavor.)

The wide array of great hip-hop albums released this year re-energized my love for a genre that seems to polarize the indie-rock set. Response to many of my hip-hop posts has been lukewarm, which has both disappointed and surprised me. Either some folks really don’t like it or just don’t know where to start, a notion that got me thinking.

At first, I thought I’d keep a regular feature in which I discuss some of the essential hip-hop albums in my collection. Then I took it a step further: I’ll ask musicians the same question. Judging solely on comments and e-mails I get, I’m guessing a majority of people who swing by here are indie-rock fans. Ideally, I hope that my posts on hip-hop have served as an introduction to it rather than a means of exclusion.

There seems to be a bit of a disconnect between indie rock and hip-hop, and, short of delving into some cultural/economical dissertation, I can’t understand why. My little utopian fantasy is to shorten that gap. For example, would it surprise you that John Vanderslice is a huge hip-hop fan? Or that John Darnielle of the Mountain Goats is, too?

This excerpt from an interview with Vanderslice:

(Interviewer): You know, one of the things that I’ve been wanting to ask you for a couple of years now — whenever I pull up one of your songs on the computer, it’s always got the genre “hip-hop/rap” attached to it.

(JV): Yeah, because that’s all I care about. (We both laugh.) It’s funny I make a point of it, when I get my albums and send them to CDDB, I always want it to be under that. … I just think hip-hop is absolutely the most inspiring thing … for me personally.

I figure if you’re tired of having me shove the hip-hop down your throat, maybe you’ll be more inspired to check some out if an artist you listen to talks about it – what makes it appealing and inspiring. I think you’ll find that some of the most well-rounded artists (such as Vanderslice or Darnielle) have the most varied tastes.

Obviously, this disconnect works in reverse, too: I’m sure there are hip-hop artists/fans who don’t know much about indie rock. Perhaps that will be a sequel to this series.

Until then, I Used to Love H.E.R. will be a regular feature (once a month? maybe more?) around here. Musicians (of all types), bloggers, writers and other industry types will drop in and discuss, in their own words, essential hip-hop albums from their collections. If the well has run dry of contributions, I’ll offer up my own. Mostly, I just want to use the feature as a starting point where people can learn about great albums and then use it as a springboard to discover more.

On a final note, the name I Used to Love H.E.R. is cribbed from a Common song off the great 1994 album Resurrection (when he went by the name Common Sense). On the track, Common personifies (and practically eulogizes) hip-hop as a woman who loses direction amid money, “gangsta rollin” and a life of glamour (lyrics). Ice Cube interpreted the song as a dis on West Coast rap, prompting his response on the Westside Connection track Westside Slaughterhouse, to which Common retaliated with The Bitch in Yoo. Westside Connection came back yet again with Hoo Bangin’.