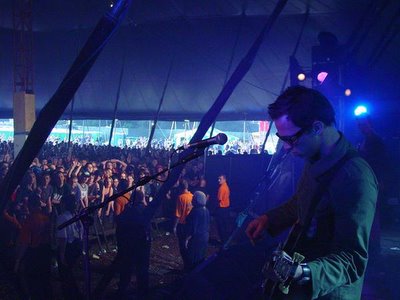 I’m excited to present this blog’s inaugural Q&A, with singer/songwriter Ian Love, whose self-titled debut (released Feb. 21 on Limekiln Records) is a moving and introspective work of acoustic beauty, not to mention a solid entry for my favorites of 2006. (Hear Butterfly now.)

Quick background: From New York, Ian (yeah, we’re a first-name basis) played in popular bands Rival Schools and Cardia. His affiliation to Rival Schools (a personal fave of mine) drew me to his solo work, which is a pretty stark departure from the post-punk/hardcore New York style.

In a brief (30 minutes or so) interview with a total stranger, Ian – 30 years old and living in Brooklyn – was kind enough to open up about his music, being a new father and husband to Jennifer, his longtime girlfriend and now wife of four years, and his years of struggling with a drug addiction that landed him in rehab at 23 years old.

(Let me say this: Ian couldn’t have been nicer on the phone and through e-mail in setting up our chat on the phone; he pretty much cut out the middle man (record label reps) and scheduled the interview with me himself – which he conducted while his 8-month-old daughter, Abigail, was taking a nap … multitasking! It’s always a relief to discover that artists you admire are really great people, to boot.)

We’re giving away at least one copy (and possibly two) of his CD. Info for that giveaway is at the end of the interview. Hope you enjoy:

Does it help as an independent artist with all the Internet attention?
“Totally. I’m not like that up on how people find out about new music or where to download music from. I didn’t realize the whole blogging thing was so big. I had no idea. In that respect, it’s amazing. And MySpace. For an independent guy recording everything in his house in Brooklyn, it’s very gratifying to be able to do something and have such instant positive stuff come back. You spend so much time creating something and you hope that once in awhile someone hears it and says they like it, but that’s mostly at shows. Now you can put something up on MySpace or someone puts up a blog about it, and immediately you get comments or e-mail. It’s pretty cool.”

When did you start writing songs for this album? Did you always have a solo project in mind?
“I put out a record with Cardia, which was more space-rockey stuff. We did a lot of touring. And I had a studio and I’d just record songs as they came along. … In the meantime, guy that does my booking, he always saying, ‘If you wanna do solo shows, we can definitely get you some.’ So I started doing that, playing Cardia songs by myself. I really enjoyed that and started writing some stuff that ended up being on this record that didn’t fit with the band stuff.”

There’s definitely a mellower vibe to this album as opposed to Rival Schools or Cardia. Do you attribute that to settling in with a family or was it always something you had in mind?
“It wasn’t a conscious thing. It sort of started as … the booking agent was having a hard time getting shows for the band. He had some shows I could do by myself opening up for people. Once I started doing that I realized I kind of enjoyed it. I go through different weird inspirations of what I like doing.

“But by the end of recording the record, my daughter was born so everything had to be real nice and quiet, having to sort of be quiet in the house. I did a lot of rhythm stuff, like tapping on the guitar for the rhythm, on the body of it … it’s nice and quiet.”

What where you listening to as inspirtation?
“The last two Wilco records … the simplicity of those. And the weirdness and sparseness of those.”

How tough is the balance now with the baby between music and family?
“When she was first born, I was trying to finish up the recording of the record. Luckily the past few months there hasn’t been much to do as far as playing. … Everything sort of goes down to three-hour blocks of time now. Doing stuff in between her naps (laughs). Her bedroom is right next to the studio.”

Was some of the writing for the record done about your time in rehab?
“A lot of it was definitely about that stuff. All the stuff was written within the past year, after the fact. It’s a big part of my growing up and my life. It definitely goes into songwriting. It’s stuff that once you go through it it’s hard to forget about it. Unfortunately, it doesn’t work that way.”

Is it therapeutic?
“Well … I see a therapist (laughs). So on top of that being therapeutic, it’s definitely therapeutic. It’s one of those things I can’t just ignore it. It’s a big part of who I am and who I’ll always be. It doesn’t mean it’s a bad thing. If I totally forget about it, it’s more likely it’ll end up that I’ll be doing drugs again. So it’s better that I deal with it now.”

How long was rehab?
“A little over a month. I’d been using heavily since I was 16 or so. I tried other ways. My family sent me to therapists. Or you can get on opiate blockers that a therapist will give you. … I’d gotten clean a few times here and there but would always end up using again. The last time worked for whatever reason.

“I was at this point where I just knew … I was just ready to get better.”

You must have a very strong wife.
“Oh man, I couldn’t even imagine what it’s like for her. We were just dating at the time. I tried to hide it the best I could. But eventually she just confronted me on it which led me to going into rehab the next morning.

“I was so isolated and didn’t have anyone in my life other than her. For me, it wasn’t partying or anything. It was just waking up every day or every two days … I’d be up for days at a time, using drugs every few hours and having brief periods of crashing out and doing it again and trying to find money to keep doing it and selling stuff. There was nobody in my life. And I hated it. I absolutely hated doing what I was doing. And I didn’t want to be doing what I was doing. But you get to this point where, you’re spending hundreds of dollars a day on drugs. You just don’t think you can stop even as much as you want to. And I just didn’t know any way to … when she finaly confronted me, it was like I was waiting for someone to do that.

“I didn’t even think about rehab, it didn’t even enter my mind. Just got lucky really. Didn’t have insurance, didn’t have any money. I somehow found rehab in Long Island that has this affiliation with this thing called Musicians Assistance Program. And they ended up paying for the rehab. I got lucky.”

Are you nervous going out on tour … are there temptations for you?
“With Rival Schools I had been clean the whole time and for a few years at that point. We toured a lot. I’ve just been really good with it. I definitely don’t get temptations. I’ve been in so many rock clubs where I go to bathrooms and there’s still coke on the toilet. I don’t have a desire to drink or do drugs.

“My first year clean … I got a job to pay rent. I went to southeast Asia and Japan and spent a summer there traveling by myself. If I wanted to use drugs it would have been a good time to do it. I didn’t. Something happened. I got clean. It just really set me in a good direction.”

Were there feelings of guilt on your part when you were trying to hide it?
“Totally. It was terrible. That was the hardest part: trying to live a somewhat normal life. When you’re caught up in it, you think things are OK and normal. You get to a point where the drugs aren’t affecting you really that much. You still function on a somewhat normal level.

“Leading up to that, I spent the year before that shooting heroin with needles. Everyone in my life knew that because it’s very obvious. I stopped using for a few months, so when I started again I really wanted to hide it. So I started sniffing drugs, somehow thinking that would be better for me, it would be easier to hide. I guess in some ways it was easier to hide. She’d (Jennifer) be in one room and I’d be in the other room sniffing a bunch of heroin as I’m flushing the toilet to try to hide it. So in that respect it was so emotionally draining.”

What are your feelings when you look back at that and verbalize it?
“It’s very overwhelming and emotional. Being in recovery is a big part of my life. I deal with it on a daily basis. … So I’m used to talking about it at this point. It’s a little easier to talk about it. I’ve done a lot of work on it.”

Would you say there’s a song on album that best reflects that time in our life?
“It was all written in retrospect. But Old Enough, Turn Off (40-second clip) or Black Diamonds (50-second clip) or It’s Not Over. Those are definitely the battles of even being clean. If you’re an addict or an alcoholic, even if there’s a time you haven’t used, it’s still just a part of you. Part of you still feels like that same person even if it’s been a long time since. … Emotionally, a lot of that stuff just stays there.”

I’d just like to thank Ian again for his time and honesty … and that CD.

Speaking of, here’s the deal. I’ve got one copy to give away and Limekiln should be sending one or two more to pass out. This should be fun and straightforward, and Ian himself is going to help pick the winner(s).

I love the artwork (done by Erica Harris) on the CD cover:

What TWO WORDS do you think of when you examine the art?
Leave your answer and e-mail address in the comment section. I’ll harass Ian to pick a winner by the end of the week!