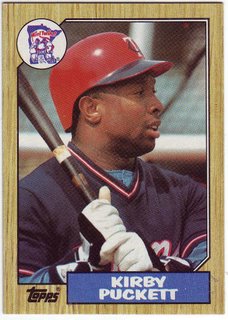 This is not the way to start a baseball season. As you’ve probably heard by now, Minnesota Twins Hall of Famer Kirby Puckett died Monday, here in Phoenix, from complications of a stroke he suffered Sunday at his home in Scottsdale, Ariz.

As to be expected, sports publications everywhere will trip over themselves to write the Definitive Obituary, which all undoubtedly will hail his baseball achievements (perhaps to exaggerated lengths as we are wont to do in the wake of someone’s passing). I was never a Twins fan, but you had to like Puckett: 12 seasons, all with the Twins (rare these days); 10-time All-Star; six-time Gold Glover; .318 career hitter; two-time world champion. Glaucoma, which caused him to lose vision in his right eye, forced him into retirement in 1996.

In all the adulation, we shouldn’t forget “The Other Kirby” (via Can’t Stop the Bleeding). Puckett’s indiscretions – accusations of sexual assault and domestic abuse, adultery – remind me why we should be leery about idolizing pro athletes and entertainers. To put these people – mere human beings like you and me – on a pedestal is to set ourselves up for disappointment. Without going into a long diatribe, I think it will be interesting to see how Puckett’s death is portrayed. Fame shouldn’t count as a free pass from scrutiny.

The message from the person sponsoring Puckett’s page on Baseball Reference is a perfect example. How do we – fans – know that Puckett was “one of the finest gentlemen ever to don a Major League uniform”? We’re idealistic as sports fans. Athletes can do no wrong. Our perspective on reality becomes skewed because sports is just a diversion; grown men playing boys games – and getting paid millions to do it. I’ve questioned my own commitment to sports and I probably always will. It always comes back to one question: Why do I care?

Don’t get me wrong: Puckett’s death is sad, to be sure. It’s odd, as I noted to Chris yesterday. I remember thinking last baseball season that it was surreal to see players I grew up watching now as managers or coaches or broadcasters. Now for one of the greats of my youth to pass away just kinda blows me away. I think of my parents’ generation, reeling off names of players, some of whom I’ve never heard, as they give you this look like, “You’ll never know what you missed.” Now I wonder: Do kids who are 10, 11 years old or even in their teens have a clue who Kirby Puckett was? Or do they think of him as just some “old-timer.”

So maybe more than anything, Puckett’s death represents (to me) a mark in time, a passing of generations. The stories you read today will talk about his “pluckiness” or his “love of the game” or his “bubbly” personality. But if I stop and think about it, Kirby just represents a time for me of collecting baseball cards (never in the bicycle spokes, though), playing Little League and being a kid. It’s not exactly analogous to Paul Simon’s longing for Joe DiMaggio/youthful innocence. But I can better understand what Simon was trying to say.

(Our regularly scheduled program of music will continue shortly … )