I’m feeling honored and humbled to discover that I’ve been linked on the blog roll of the terrific Soul Sides, one of the pioneers of the mp3 blogging game. Naturally, it got me digging through some vinyl, mostly the 45 stash, where I’ve collected a bit of James Brown.

Chances are, if you’ve listened to even a scant bit of hip-hop, you’ve heard James Brown’s Funky Drummer in some form or fashion. I’m not going out on a limb by saying it’s probably the most-sampled drum loop. The Wikipedia entry for Funky Drummer has a listing of some (but not all) of the hip-hop songs that copped this beat. Most notable are Eric B. and Rakim’s Lyrics of Fury and four tracks apiece by Public Enemy and Run-DMC. Hell, LL Cool J used it (at least) twice for two tracks on Mama Said Knock You Out.

I was surprised to see some tracks that I didn’t know used the loop or was just too dense to put two and two together. Others simply frightened me (Exhibit A: Vanilla Ice, Stop That Train).

For the record, that funky drummer is Clyde Stubblefield. Get a few clips of him playing at Drummer World. 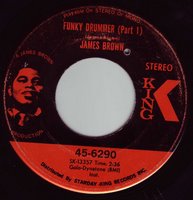