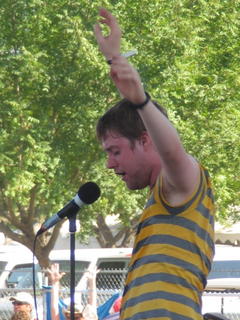 Ricky Wilson at ACL.
I used the weekend to catch up on my KCRW podcasts. If you don’t subscribe to any of these, I highly recommend you rectify that. In particular, Nic Harcourt and BBC’s Steve Lamacq’s Music Exchange podcast.

That’s how I heard about the War Child benefit CD Help. War Child, as its name suggests, benefits children affected by war. The CD appears to be available only in the UK at this point. (Anybody in the UK wanna hook a guy up?) The CD (22 songs) includes tracks (most new, I believe) by Radiohead, Elbow, Gorillaz, Damien Rice, Bloc Party, The Manic Street Preachers and the Kaiser Chiefs, who cover Marvin Gaye’s I Heard it Through the Grapevine.

The Music Exchange podcast played the Kaiser Chiefs track in two parts. So, using Audacity, I cut and pasted the two parts together to make an mp3; it’s choppy only in one part (where I had to paste the two parts together). Regardless, it’s a pretty cool cover, and I’d be really eager to buy this CD if it were available in the U.S.

Kaiser Chiefs | I Heard it Through the Grapevine