By the time you’re reading this, I’ll be in a car somewhere on the Interstate 10, nothing but desolate desert … and the Flying J truck stop in Ehrenberg, Ariz., for some Wendy’s, on the way to Los Angeles. For a six-hour car drive, I don’t get to Calif. as much as I should. So I’m looking forward to my three days there.

The highlight of the trip is Wednesday’s show with The National and Talkdemonic. Cannot wait. After reading Ryan’s recap of the Chicago show and Frank’s review of the Toronto show, I’m even more excited for this sold-out event. 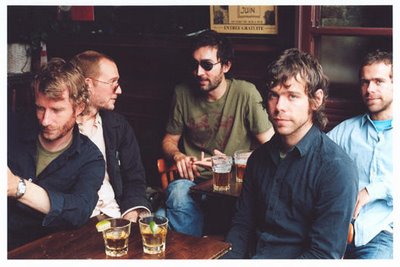 We’ll also be seeing my sister-in-law June, who is very much pregnant. Due to pop next month. So here’s a Talkdemonic song off the new one, Beat Romantic, for her – and our soon-to-be nephew.

My boy Royce has promised he’ll be posting while I’m gone … so there will be no interruptions of your regularly scheduled programming.

I absolutely forgot to recap my haul from Saturday’s record swap meet in Phoenix. I was having little luck finding much: I picked up Inxs Kick on 12″ and a live Marvin Gaye album.

I decided to hit one last table. The lady was super nice and said all LPs were $4 or three for $10. She told me the 45s (two boxes worth) were 50 cents apiece. So I snag the Rolling Stones’ Out of Our Heads and the Cream Disraeli Gears on 12″. Need that third one, right? So I go back and find the Who, Live at Leeds. Not only is the record in decent shape, the cover opens up like a folder and contains paperwork with typed lyric sheets and other odd, record label stationery and such. The woman couldn’t believe I found it and says it books for $50-$70. I immediately feel awful, telling her she should take it back. But she insists that I found it so I should have it in the three for $10 deal under the condition I don’t resell it. Done.

As for the 45s, I snagged a bunch of Michael Jacksons for the jukebox at home. The gems were a Capitol 45 (orange vinyl!) of Blind Melon’s No Rain and an REM 45 for The Sidewinder Sleeps Tonite with a ridculously cool cover on the b-side of The Lion Sleeps Tonight. 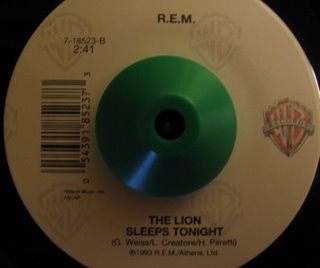 Here it is, converted from vinyl.

7 thoughts on “Los Angeles, I’m Yours”