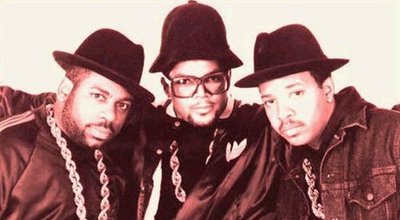 Slowly but surely, I’ve been repurchasing my Run-D.M.C. collection because of the Legacy reissues of the seminal hip-hop group’s catalog. Each reissue CD contains bonus tracks, either live or instrumentals or remixes. There are few groups I would rebuy CDs for, and Run-D.M.C. definitely is one of them. At this point, I’m only missing the Raising Hell reissue.

It’s pointless to get into some celebratory spiel about the group’s greatness (the repackaged liner notes do that quite well), but every time I listen to Run-D.M.C. I’m astounded. There is something very simple and pure about what they were doing. Listen to the beats. To the lyrics. There is nothing dressed up about them.

Not to sound like a bitter traditionalist, but revisiting these albums makes me long for something better from hip-hop. How is it that something so elemental in its function was so groundbreaking in its vision? I think that’s a rhetorical question.

So my wife thought it would be “easy” for you to guess my two favorite hip-hop albums. It doesn’t appear that way, seeing as how only four people took a stab. So I’m going to pare it down. One of the two albums is A Tribe Called Quest’s Midnight Marauders. Now, you must guess the other. Here’s a hint: It was released in 1988.

Here’s the contest post. Keep in mind: If you don’t want to find out about cool parties, bands or other Vice Records or addVice stuff, just say so. Otherwise you’ll be added to their e-mail list.

I’m probably gonna go check out Jax on the ones and twos tonight at an afterparty for Oh Shit! A Fest? in downtown PHX. Check it out if you live in AZ.