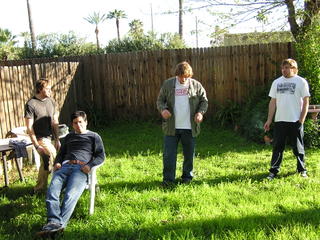 Secret Life of Painters is a Phoenix-based band that has essentially been together for five years, and has stockpiled enough songs that the guys have their first two full-length albums already mapped out. Impressive.

“I like these lo-fi revisits and impressionistic word jumbles, like Guy Bowcock’s Second Coat and Fast Black Rats, the closest thing here to a radio-friendly cut (well, “Redefine your acronym,climb into your bastard skin” is shower singing, anyway).”

A 7-inch single is due shortly, and the guys are wrapping up recording a full-length debut, Careers in Poverty. You can find demos from Careers and even some material from their older bands here. Quite generous they are with mp3s.

What about the name, you ask? Well, Hofmann and Kiley were, in fact, house painters,but they never let on to their co-workers they played in rock band. Hence, Secret Life of Painters. They’ve given up the trade, but the name remains the same.

Also on the Phoenix front, sourceVictoria has posted a couple mixes of new tracks — The Fast Escape and Heartless Boy — for a forthcoming LP at their MySpace page. Be sure to check them out.