Blogger has been acting up today, which is sad because I was going for a multiple posts today, something I rarely do. But it appears to be up and running, so I’ll give this a go.

On June 29, Band of Horses are returning to Rhythm Room in Phoenix, where they played in March after SXSW. This time, I hope they bring along Mat Brooke, who was conspicuously absent in March. He is one of the two founders of the band, after all. 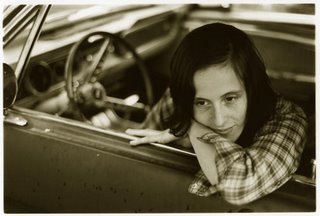 Really, I’m not here to talk about Band of Horses. No, one of the openers is Sera Cahoone, who besides having a great name, was the former drummer of Carissa’s Wierd, the former band of Horses founders Brooke and Ben Bridwell.

Cahoone has gone solo, and her self-titled debut (buy from Sub Pop) is an alt-country affair with some lush vocals and instrumentation. I’m a sucker for a pedal-steel guitar and some mournful singing.