I swear sometimes when I go to record stores, I don’t find vinyl … it finds me. I’ve had pretty decent luck lately – or it just could be that I scour the same few shops so often that something is always bound to turn up.

Either way, it’s always great when a little labor pays off. Turning up a worthwhile 45 or LP after slogging through piles of dusty stacks makes the work worth the trouble. It’s even better when it’s 99 cents, like this Spoon I Turn My Camera On 7″ I found at the Zia in Tempe. 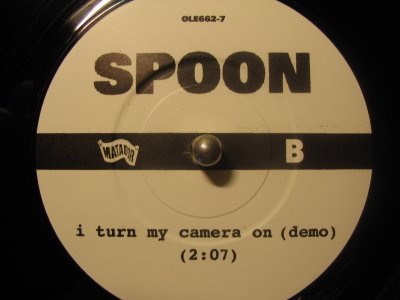 The A-side is the album version of the song; the B-side is a stripped-down demo. (I suppose that’s repetitive.) The demo, sans drums, is great because you can really get a feel for the origin of the song – how the rhythms develop, how the bass sounds, where the drums eventually will fit. Better yet, Britt Daniel and Co. rock a xylophone in the demo shot.

And don’t worry: A little analog static is on me.

Spoon | I Turn My Camera On (demo) 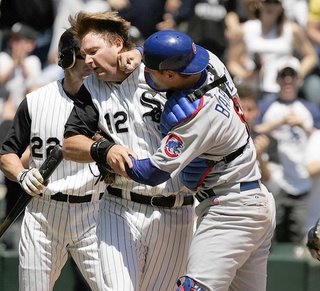 I’d be remiss if I didn’t add my two cents on the Cubs-White Sox scuffle from the weekend.

Quick recap: White Sox base runner A.J. Pierzynski bowls over Cubs catcher Michael Barrett on a (perfectly legal) play at the plate on Saturday. Pierzynski is safe and slaps the plate with his hand for good measure. He walks by Barrett, presumably to pick up his helmet, when Barrett grabs him and reportedly says, “I didn’t have the ball, bitch” – in other words, telling Pierzynski a slide into home plate would have sufficed.

Nevertheless, Barrett loses his mind and coldcocks Pierzynski pretty squarely (as detailed in the photo above) in the face. Benches empty, more punches thrown, etc.

In the aftermath, and having seen the highlights at least 40 times by now, there’s no defending Barrett in this, even as a lifelong Cubs fan. Pierzynski, tagging up from third base, never could have known Barrett didn’t have the ball – or at least wasn’t going to receive the throw by the time he was going to reach the plate.

However, I will say it was oddly cathartic (if not kind of surreal) to see it all go down. The Cubs have been underperforming this season and the frustration must be at a boiling point. Of course, that’s no excuse to throwing punches willy-nilly. Barrett deserves whatever suspension is coming his way. But damn, that was exhilarating. If it jump-starts the Cubs to some semblance of a winning streak, then maybe Barrett knew what he was doing.

It should be noted that Pierzynski is not very well-liked among some of his peers. Sporlitics has a rundown of why more than a few people probably took a little joy out of Barrett’s knuckle sandwich (via Deadspin).