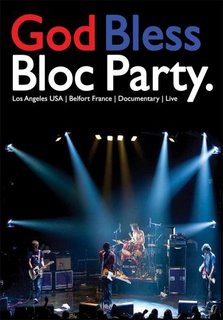 Before I write anything about this DVD, I should mention: I like Bloc Party. Silent Alarm was in the top 5 of my favorite albums list of 2005 (I’m sure they’re flattered) and their set at ACL was the first time I’d seen the band live, and I was mightily impressed.

That said, the release of God Bless Bloc Party made me question how vulnerable (gullible?) we are as fans. An LP is never enough. To sate our thirst for more (or is that the record label’s thirst?) we open our wallets for a remix album and DVDs, these stopgap measures to tide us over until a new album is released. (Full disclosure: I was sent a review copy at no cost to me; however, I would have purchased this DVD otherwise.)

God Bless Bloc Party is a two-part DVD: about an hourlong documentary (filmed around June 2005 shows at the El Rey in LA) and about 20 minutes of festival footage from Belfort, France. The live footage from France is fantastic. Multiple camera angles and polished production pretty much tip you off that this DVD was in the works when they filmed the show in July. Matt Tong’s amazing work on the drums is enough to hold my attention.

My beef comes with the so-called documentary portion of the disc. Ideally, a documentary (in its truest sense) has a story to tell, some compelling reason a camera is trained on a band or person. God Bless left me feeling pretty empty. Ask yourself (honestly): Is Bloc Party, one album into its career, a worthy subject for a documentary?

Maybe it’s unfair to compare, but the Wilco movie I Am Trying to Break Your Heart set a standard, in my mind, for music documentaries. This isn’t just a about a band, but there was a story to tell, about Wilco’s struggle within the industry.

God Bless is nothing of the like. This documentary is more or less backstage footage – look, drummer Matt Tong is making a backstage sandwich! – spliced around a live concert. Worse, the guys in Bloc Party look terribly uneasy and/or uninterested at times when the camera is rolling. Scenes of the guys being interviewed by journalists in green rooms and trailers are almost unbearable to watch. (To wit: when a journalist is stumbling, trying to ask singer Kele Okereke about sounding British when he sings; Okereke’s response: “Really? I sound British when I speak as well.” Gulp. Next question.)

Maybe the mistake is in the packaging. Why promote this as a documentary? Just call it what it is: Bloc Party, live in concert. Labeling this a “documentary” feels too self-important (as if titling it God Bless Bloc Party didn’t already), and there’s nothing I gleaned from God Bless that I couldn’t have learned in an in-depth magazine article.

I think the most enlightening words come early in the documentary, when Matt Tong is talking about being “on the other side” – as in, being in the band and not as a fan subjected to the constant blitz of consumerism: “Hopefully, people see beyond the hype, really, and appreciate us for what we are.”