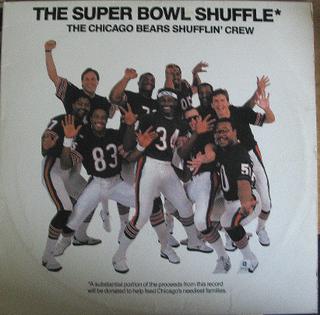 It’s almost August, which means NFL teams are reporting to training camp, which means it’s never too early to start thinking about the Super Bowl. It’s like spring training, when every team thinks they have a shot. Only I’m a Bears fan and I KNOW they don’t stand a chance.

Ah, but memories. We can always milk the 1985 domination. Payton, McMahon, the Fridge. What about those linebackers? Singletary, Wilson, Marshall. Then there’s Super Bowl MVP Richard Dent. That team should have turned into a dynasty. Alas …

Yes, I’ve digitized my 12-inch vinyl of the Super Bowl Shuffle, which was in vogue long before the Ickey Shuffle. I could never decide whose verse I liked the most, but what I really could never figure out is how backup QB Steve Fuller ever got on the song.

Anyway, be sure to check out the pure cheesiness of the “Extended Vocal Mix.”