Once I discovered the blog/photo journal of old-school rapper D-Nice, I couldn’t help but click through his archives. He was (is) one of my favorite rap artists. I came across one of his posts about the single Self-Destruction, a track recorded under the Stop the Violence Movement that featured some serious hip-hop heavyweights from the East Coast and was produced by D-Nice at the tender age of 18. (Read his post for more on that.)

Anyway, it got me digging into my vinyl because I own the 12″ single and I thought I’d revive it here. Recorded in 1989, it seems pretty incredible (perhaps in a sad way) that the track still carries a worthwhile message. I didn’t find a whole lot about it on the Internet, other than this one line at Wikipedia that tells how the Stop the Violence Movement originated. You might also remember the West Coast All-Stars’ similar project We’re All in the Same Gang. (If anyone has this, I’d love to hear it again.)

Besides the strong message it carries, Self-Destruction is just a great song with a singable chorus. And all proceeds of the record were donated to National Urban League “to support and develop programming dealing with Black on Black crime and youth education” (taken from record cover). 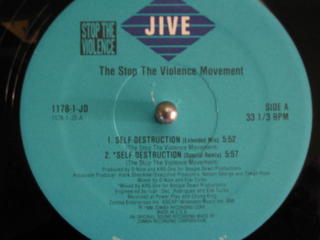 I’ve included three of the four mixes from the single (excluded the “single edit”). Still trying to decipher the difference between the “extended mix” and the “special remix.”

5 thoughts on “The Stop the Violence Movement: Self-Destruction”