Well, I’m headed off to LA today for the weekend and figured this would be a perfect time to bust out this vinyl 45 flashback: LL Cool J’s Goin’ Back to Cali. 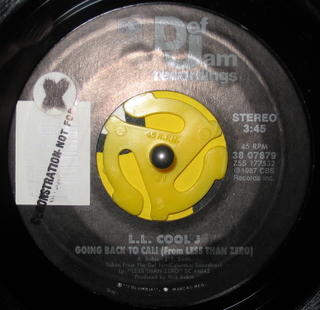 When you’re talking about greatest rappers of all time, LL’s name has to come up, and I’m speaking strictly pre-Mr. Smith era (though I’d guess LL could take out any young whipper snapper … hello, Canibus). For raw beats and brash lyrics, LL’s Radio and Bigger and Deffer are hard to top. Radio stands atop my hip-hop collection with the likes of Run-DMC’s Tougher than Leather and A Tribe Called Quest’s The Low End Theory.

As for Goin’ Back to Cali. (on Walking With a Panther and the Less Than Zero soundtrack), it’s interesting to note the cultural influence the title alone has. If you google the title, you’ll find a lot of links to newspapers that used the headline “Goin’ back to Cali.” for some story relating to the state. I’ll never forget the video, all black and white with LL rollin’ in his ride when he drops the line: “Bikini small / heels tall / she said she likes the ocean.”

The B-side to the 45 single is Jack the Ripper, which I don’t believe appeared on any studio albums (but does show up on multiple Best of Def Jam compilations). It’s classic LL: in your face with a funky James Brown guitar sample and production by Rick Rubin.

See y’all Tuesday, and get your captions in for the Rex Grossman photo below!

6 thoughts on “Flashback Friday: Goin’ Back to Cali.”