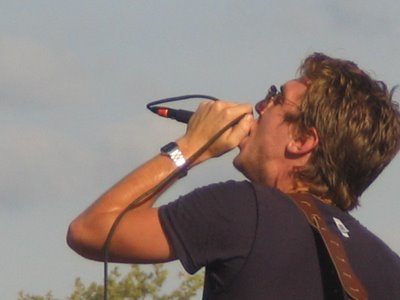 The Walkmen’s Hamilton Leithauser, ACL 2005.
I’m running on emergency backup computer here: my brother and his wife’s laptop. Thank the God for them because NPR Webcast the Walkmen on Thursday night, and I was pretty much worried all week about whether I’d have access to this, what with my computer in the shop and all. I’ve listened to the new album A Hundred Miles Off, and, in my unprofessional opinion, it’s … well, awesome.

We were fortunate enough to be about 20 feet from these guys on the side of the stage while they played at Austin City Limits last year. Their intensity is unrivaled, and I’m eagerly anticipating their Tempe show on June 17.

Here’s the first four tracks from Thursday’s set split into individual mp3s; the rest is coming. The entire file is available from NPR here. (The eMac won’t be back until Monday … ack! This is plain torture!)