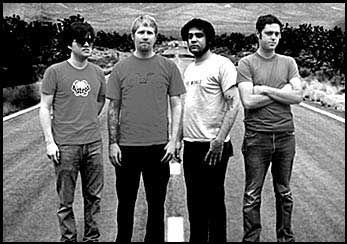 My friend/co-worker is a member of Tokyo Electron, and I’ve been meaning to do this post for a while. It’s a little punk outfit originally from Yuma, Arizona, which is pretty damn close to the Ariz./Calif. border.

So, he’s on a leave at work because the band is touring Europe right now (enter Napoleon Dynamite voice: LUCKY) in support of the group’s debut self-titled LP. He dropped me an e-mail from Stockholm with this bit of news: The lead singer of the Hives bought a Tokyo Electron shirt and walked out of the club wearing it. Nice! Pretty sweet endorsement if you ask me.

I hate fantasy football. Mind you, I’m doing just fine in the music bloggers league: 2nd place heading into this past weekend. Of course, there is no money involved in that league. No, in the league I pay $60 to enter my team is absolutely horrendous. I lost this week in a game I had no business even flirting with victory, but I’ll complain anyway. I lost when Antwaan Randle El — a wide receiver, but a college QB — threw a freaking touchdown pass on Sunday night. I lost by two points. Woe is I.But how ’bout them Bears! First place. 6-3. Nathan Vasher pulls an Arena Football League play and returns a missed field goal 108 yards for a touchdown; longest play for TD EVER in the NFL. (And I love the orange uniforms.) This is starting to feel like a few years ago when the Bears were pulling all sorts of strange plays outta their asses — remember two Mike Brown interception returns for TDs to win games? — and went 13-3.

Meanwhile, my Arizona State Sun Devils lost yet again, to UCLA on Saturday. Now they have to beat the hated Arizona Wildcats on Nov. 25 to even sniff a bowl, most likely the Las Vegas Bowl. How awful. I am not banking on a win. UA has plenty of incentive and would love nothing more than to keep ASU bowl-less. Not good.

I’ll be hitting you up with some previews/mp3s this week on bands playing at this Saturday’s Grand Cayenne Music Festival, which features Spoon as the headliner. It’s an all-day affair in Mesa, and should be a blast.