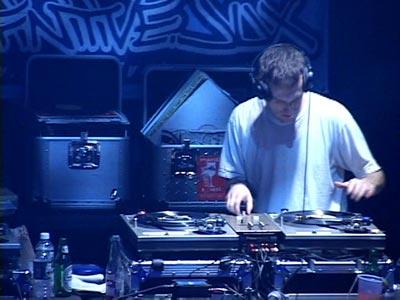 Already, 2006 is shaping up as a prolific year for RJD2, the sound-collage king from Columbus, Ohio. He accompanied LA underground legend Aceyalone on Magnificent City and manned the decks for Soul Position’s Things Go Better With RJ and Al, his collaboration with Rhymesayers emcee Blueprint. This week saw the release of Magnificent Instrumentals.

Lest we forget, RJ’s solo work – Deadringer and Since We Last Spoke – has been hailed as “21st century soul.”

RJ is in Tempe, Ariz., tonight with Blueprint and he was kind enough to answer 10 quick questions via e-mail in which he discusses “junk” records, this year’s projects and we discover he’s just like you and me – he likes (who else?) Sufjan Stevens:

1. It’s been a busy year for you with the Aceyalone and Soul Position projects. Have you had much time to think about or set out a blueprint (so to speak) for your next solo project?
RJ: Yea, im getting that thing going. i dont want to talk about it right now much, though, if thats ok. alot is up in the air.

2. How does your mind-set differ when you’re gathering samples and creating music for a collaborative project as opposed to your solo works (if at all)?
RJ: the things that i end up keeping for myself are usually things that have the potential to be developed into something bigger. i see the production work i do for other people as something that should have a different feel than my solo records.

3. When you do two projects like Magnificent City and Things Go Better with two different MCs do you tailor the production beats to each MC’s style? In other words, do you have the MC in mind when you’re making the music?
RJ: no. when im working with a rapper, i try to send them as much variety as possible, within the confines of something that could be rapped on. i have learned that sending a particular sound to people can leave out things they might want to work with.

4. Can you discuss similarities or differences in working with Aceyalone and Blueprint?
RJ: the new sp (Soul Position) album, to me, is a very stylized affair. i think it is mostly a soul/funk oriented record, sonically. the acey album is all over the place, in my eyes. acey wanted me to do whatever i wanted, and really trusted my vision for the record. blueprint has always been more hands on, but he’s also a producer, so that probably makes him more picky.

5. Let’s get a handle on your vinyl collection: How many LPs/45s would you say you own — and, as a follow-up, what’s your most prized or sentimental piece?
RJ: off the top of my head, i would have to say any of the columbus rock or soul records i have, or one of the few new things i have that sampled an rjd2 record.

6.When you go digging/shopping for vinyl, are you looking for albums that have potential in terms of samples or are you simply looking for good albums? (A side question: Where do you do a majority of your vinyl buying — thrift stores, garage sales?)
RJ: honestly, i havent been hyper-obsessed with records for the last two years or so, because my focus has moved over to gear, but in general, the challenge of sampling for me has always been to make something better, or make something good out of bad source material. so i have a lot of “junk” records, things you probably wouldnt want.

7. There seemed to be a phase for a few years where scratch-heavy “turntablism” was all the rage. With guys like yourself, Shadow, Z-Trip, Cut Chemist, etc., how do you see the art of DJing progressing?
RJ: i dont know. i guess it seems like there are a lot of different approaches to djing, producing, making electronic music, or hiphop, and they all seem to cross-pollinate every year or so. now, im just thinking in terms of music. i want to make something someday that will stand up next to “real” music, so im not just keeping my eyes on my peers, if you will.

8. In most reviews and stories, writers are quick to call your music “cut-and-paste.” That seems like a major oversimplifcation. Are you at all offended by that term?
RJ: no. i think that, or collage music, is an accurate term for the records i have done in the past. id like to think im moving more towards a more cohesive sound, but i think its accurate for my solo albums. really, any other kind of record is made very similarly-you cut the rhythm section, send the session down to another studio to get the strings done, the singer comes in two weeks later to record the vocals. my records are done just like that, except i end up pulling the source material from whatever i can find in my home.

9. The Brainfreeze project by Cut Chemist and Shadow seemed to spark interest in the original source material and artists they sampled. Is that an intended goal when you’re producing music, to perhaps uncover or reintroduce a long-lost artist/album to the public?
RJ: no. like i said before, one of my underlying goals is to not use good music as source material.

10. Finally, what artists, bands or musicians are inspiring your work — past and present?
RJ: right now, im into dungen, sufjan stevens, ELO, the teeth, dead sea.

RJD2’s catalog, including Magnificent City and Things Go Better, is available at eMusic.

Saw John Vanderslice with Laura Veirs at Modified. John freaking Vanderslice. Played an hour and half and at least 20 songs, probably more. I won’t bore you with some full-blown concert review. I strongly recommend you see him as the chemistry with this band is unreal. Also, he’s selling John Vanderslice pillowcases. Seriously. (But do yourself a favor and spend the 12 bucks on a CD.)

If you didn’t see him on this tour (and there are only three dates left), maybe you should click here and download an entire live set that JV graciously provides on his Web site. And he did say that Phoenix (specifically Modified) was his favorite place to play in the country. Boo ya!

JV songs that zoomed to top of my rotation after last night: