And now, the post you’ve all been waiting for … well, at least one of you.

Allow me to backtrack to the National show in LA last week. Annie and I are having a splendid time at the bar with Justin and his wife, Melissa (two of the nicest people you’ll meet). Then the house music dies and a tall man with a button-down shirt (white collar/cuffs) takes the stage. He’s by himself. Singing. There’s some electronic-type beats backing him. Nothing more, nothing less.

So we’re sorta stunned. Like, this isn’t for real, is it? It is. And, admittedly, we kind of have a laugh at it. Until … um, well … I start getting into it. For a guy who is like a cross between Harry Connick and Rick Astley (props to the wife for that reference), I’m thinking this is some ironic/hipster ploy. It isn’t.

And it isn’t funny anymore when all the cool kids start slowly migrating toward the stage, eager for a closer look whilst bobbing to the beats. I can’t decide: He’s retro, he’s ironic, he’s hip, he’s ballsy, he’s … good. Hell, he has a pompadour. And he’s sort of doing this mic-in-one-hand, mic-cord-in-the-other-hand dance that you might do if you were at home by yourself listening to Wham!. In a matter of about a 40-minute set, Baby Dayliner converts elitist hipsters to cooing fans. 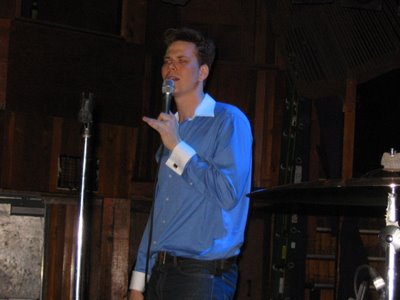 Melissa was so enamored with Baby Dayliner, she just had to get her picture with him. So she steps to him at the bar, tells him he put on a great show, and he’s a real nice, laid-back cool kind of dude. He makes small talk – and makes some pretty sweet faces for photos: 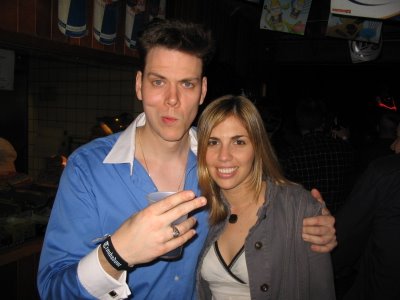 Now I have to jump into the scene: 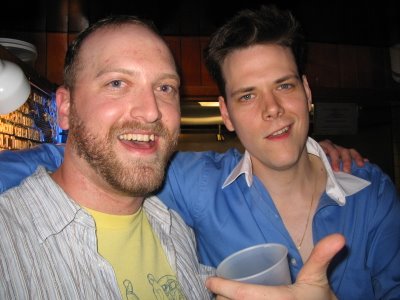 So does my wife. Baby Dayliner is winning over our wives. (Cut to scene: Me falling to knees, arms extended to sky): Daaaaaamn you, Baby Dayliner!!: 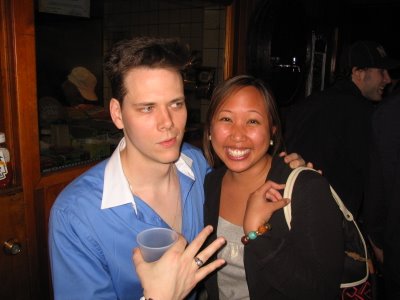 Peep Baby D (that’s what I call him) on MySpace. His new album, Critics Pass Away, is due out in May on Brassland.

How about some upcoming shows in the A to the Z?: