Holy hell. I didn’t realize how dependent I was on technology until my Cox digital package of telephone/cable/Internet bugged out for two days. It’s fixed, thank heavens. But I may need help: Hi, I’m Kevin. And I’m addicted to the Internet. (OK, now, everyone, all at once … “Hiiiii, Kevin.”)

Anyway, I have lots to catch up on this week, including Monday’s show at the Rhythm Room with the Cloud Room and Phoenix’s own Asleep in the Sea.

I’ll start with Asleep in the Sea, a trio that’s becoming one of my favorite local acts, as much for the guys’ approach as for their music. That was never clearer than on Monday, when there couldn’t have been more than 30 people in the place (hey, it is Phoenix) when they took the stage at about 9 p.m.

Instead of sulking, Tom (guitars, vocals), Owen (keys, bass) and Eli (drums) embraced and made light of the situation. When life hands you lemons … errr, something like that. Anyway, the best way I can describe Asleep in one word is this: irreverent. They have a special talent for not taking themselves too seriously, and that should hold any cynicism of a fledgling band at bay (for now).

Asleep in the Sea | Dance On

Also, Asleep put out a MySpace bulletin about an upcoming tour. They’re asking for any help in setting up shows. Go be their friend and help ’em out!

As for the Cloud Room, I came away really impressed. But then I’ve been enjoying the band’s self-titled debut, so I sort of went in with high hopes anyway.

The band, especially frontman J., captured the emotion and energy of a band that is – and should be – going places. For all the buzz Hey Now Now has created (it was the penultimate song on the setlist, if you were curious), I’ve found myself absorbed with the rest of the album: particularly Blackout!, Waterfall and We Sleep in the Ocean.

At the risk of sounding like a band sycophant, I did chat with J. after the show when I bought a 7″ for Waterfall. After all, he was wearing a National shirt; how could I resist? Anyway, besides being a really nice guy, he seemed to have his focus trained on the group’s second album, for which they have four songs recorded already. The band had a one-album deal with Gigantic, so they’ll either shop new stuff to labels or put it out themselves.

From what I could gather in my quick chat with J., he seems eager to calm the hubbub surrounding Hey Now Now – which, if the previously linked Pitchfork article is to be believed, was the inspiration to a hastily thrown-together album – and let people form opinions on the Cloud Room from what should be a more carefully crafted LP. J. seems acutely aware of the fact that not a band (or a career) does one single make, catchy as it may be. But that’s just my guess.

Whatever the case, on to a few pictures: 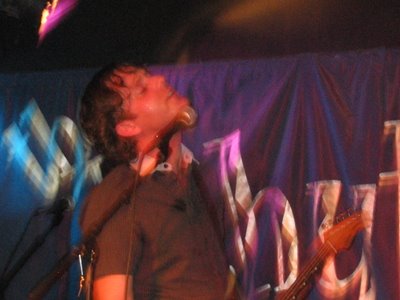 2 thoughts on “Pictures/recap of the Cloud Room in Phoenix”