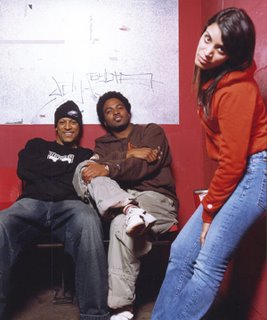 OK, so I’ve had this one in the bag for a while, and I’ve been really excited to post it. After I posted on the Procussions (who opened for Digable Planets last year), I was contacted about an opportunity to interview Doodlebug (aka Cee Knowledge), one-third of the fantastic Digable Planets. Yeah, like I was going to say no to that.

The DPs, as many of you know, reunited last year after 10 years apart. I’m excited about the potential that Doodle, Butterfly and Ladybug can recapture. Even if it feels a bit nostalgic, there’s still a market eager for what the DPs offered in their heyday.

For me, any conversation of hip-hop includes Digable, who blended the cool-cat vibes of jazz with laid-back beats to create a chilled vibe. It’s almost surreal that they reformed, but hip-hop is better for it:

How’s the touring?
“It’s good. … We’ve been touring all of 2005 up until the end of January. Now we’re gonna take a break. I’m gonna start working on a solo project. … I have a new mixtape out called the Cosmic Funk Essentials. Around April we’ll start working to record a new Digable Planets album.”

What kinda people are you seeing at shows?
“I’m seeing a lot of young cats, so they obviously couldn’t have been big fans when we were first out … they’d have been too young. After shows, I’m talking to people that say they’ve been down with us for so long and they went to shows. There’s also cats that are in college that heard about us and liked our music and never had a chance to see us perform and they were excited because they never thought they’d have a chance to see us perform. … I think it’s a mixture of old and new.”

What’s the response been like?
“Yeah, it’s real great. After such a long break, for them to have all those people come out and show support with no new record out … that was awesome, man.”

What can we expect on a new album?
“I really don’t know … it’s gonna be 10 years’ experience traveling the world, meeting new people. I think we all grew as artists, as producers, as people and producers. That growth should be shown on a new album.”

What led to you guys splitting apart?
“There’s a lot of different things. It would take too long to go into them all. I’m not trying to air no dirty laundry. It boiled down to us being young, rebellious and not really understanding the business. Our record label was starting to fall apart around the time we broke up. Our management company wasn’t together right. A lot of things that were going on, plus personal issues that kinda put us in a corner. … We got into this for fun. And when it stopped being fun, we decided to walk away. ”

Was there regret?
“Most definitely. I can only speak for myself … I didn’t think it was a good idea. But it was the best thing to do at the time. After a couple of years I definitely regretted it, and I stayed in touch with the other two. I did some solo stuff and Ladybug would come in and help me out on some things. Butterfly came in on a show I did in Philadelphia.

“But it took awhile for everybody to get over whatever the issues we had to get over. Finally we were mature enough to talk about those issues. I had an opportunity to do a tour in Europe last February and I thought it might be a good chance to get everyone back together again. And if it didn’t’ work out and if everyone wasn’t feeling it anymore, it would have just been a nostalgia thing, it woulda been over. Halfway through the tour everybody was coming up to me telling me how much they loved it and how they wanted to keep it movin’.”

Was it ever a thought before the tour that you should get back together?
“We had some legal issues that we had to handle that we all had to come together again for. … But that didn’t really need us to be in the same city again. A couple of months after that, I kept in Ladybug’s ear and Butterfly’s ear. Eventually, we got to a point where we sat down and decided after a couple of talks on the phone to sit down in September 2004. We had a meeting for a couple of hours, and at end of the meeting, we decided, let’s try it.

“We hired a booking agent. We were booked up for an entire year. It was amazing that people actually wanted to book us. It was exciting, it was a real exciting time, man.”

What was it like the first time back on stage?
“The first time was kinda nerve-racking a little bit. I wasn’t sure what to expect, I didn’t know what to do. It had been 10 years or more since we were on the stage together. But at the same time, we were all professionals. Individually, we maintained a stage presence doing our solo projects. I was nervous all the way up to the time we hit the stage, but once we hit the stage all the nervousness died away. We just flowed. The first show (in Vienna) was hot. It was real hot. It was real tight.”

What do you think has changed from time you split up to now?
“The music, the artists, the culture that surrounds the artists and the recording. That hasn’t really changed. But the way they market and way record labels are involved, their level of involvement is a lot different than 10 to 12 years ago. They’re willing to put up bigger budgets. Marketing campaigns are outrageous. People are getting a lot more money than back when we were doing it. … The focus in terms of market has changed. The mainstream market is really more focused on the pop, that gangsta rap. It’s different. We’re a little older. I think there’s a market for everything. Going out and doing these shows has really proved it to me. With no record out and not too much publicicty, these shows are packed, people were out there and they were interested. They knew the songs and they would sing along with us. These are songs out in ’94, ’95. So I’m like, ‘Damn!’ There’s definitely still a market for this.”

It shows people are starving for good hip-hop.
“There’s still good music. It’s just that the mainstream doesn’t always seem to focus on the good stuff. Underground has held down a lot of great artists. They just might not have right outlet or right situation that it takes to get there. It’s also a lot of luck.”

Are you nervous that you’ve lost a portion of your fan base?
“It’s probably gonna show in terms of record sales. That’s where there the pressure is more on us. It’s pressure because you have to find a label that’s willing to do it. But as long as you do your thing and be yourself … at the time we did our first album, nobody thought we would have commercial success. Everybody looked at us as group that would be college radio group. A&R signed us took a chance with us. All meetings were concentrated on college marketing. Then the single (Rebirth of Slick (Cool Like Dat) ) came out and it somehow hit a nerve with the fan base. And it went way past their expectations. I don’t think they were even ready for what came with that song.

“As long as you stay true to yourself as an artist and a person and do your thing and do the best you can do, you never know. There’s no guarantee people are going to like you, as long as we do our best I’m happy with that. … I know there’s a fan base that’s going to follow us and grow with us.

You’ve got so many people caught up in nostalgia. There’s got to be a fine line, catering to fans that were with you back in the day but also moving forward.
“Yeah, that is true. The position we’ve been put in, it’s been so long, people didn’t even think we were gonna come back. And now they’ve solidified their ideas of what we’re supposed to sound like. ‘Cause all they had to listen to was the first two albums. They weren’t with us when we grew as individuals when we were apart for those 10 years. So the dynamic of all three of us together, it’s going to be different for all of us … us and our fan base.

“Hopefully it’ll work out. I’m confident that it will, just from energy of the live shows. That was the key to whether or not we were going to be able to do this. After 10 years, you have to regain that vibe and that trust as performers. And on stage, I think we reclaimed that.”

6 thoughts on “Q&A with Doodlebug of Digable Planets”