So glad the Sunday visitors got worked up enough to indulge me in my grammar fetish on the post for The Boy Least Likely To. Always love a little crossfire on grammar and prepositions. Keep the comments comin’ … except for the ones rippin’ Matt at YANP. Come on, now.

Anyway, I just counted, and including this here post, seven of my past eight posts involve some sort of radio broadcast. That can mean one of two things: There’s some excellent radio out there; or I’m spending far too much time in front of my computer. Or, maybe both. Yeah, probably both. 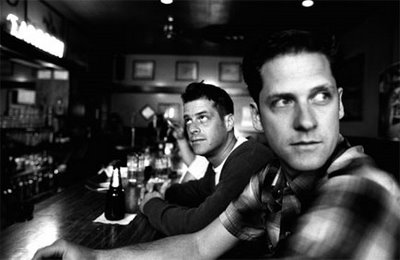 What’s there to say about Calexico that hasn’t been said already? As a proud Arizonan, I can puff my chest a little more when talking about Joey Burns and John Convertino, given their Tucson residence. From personal experience of living here for a good 20 years, I can tell you that no other group captures the soundtrack of this state quite like Calexico. As Burns calls it during the interview, “the high lonesome sound.”

He continued: ” … It’s a feeling of longing, sadness, sorrow. But yet at the same time it’s not toally depressing; it’s also uplifting.” It makes living in the desert sound so mystical.

8 thoughts on “Calexico on KEXP: “The high lonesome sound””