Before I get to the Dios (Malos) photos, some horrible news: Saturday’s Grand Cayenne Festival — that was to feature a pretty incredible lineup with Spoon, Mates of State, the Album Leaf, etc. — was canceled. I don’t know the official reason for cancellation, but I can only guess lack of ticket sales. It’s a sad and frustrating statement of our city that a show like this can’t spur interest. If the Phoenix/Tempe metro market wants to be a major music player, this show should have sold tickets in a heartbeat. My guess is you folks from other cities will be somewhat appalled by this. Thoughts?

Moving on to Dios …

These guys are cool, cool, cool. Modified is a small — shall we say … “intimate” — venue, and Dios rocked it. It was loud, but in a fulfilling kind of way. The dual keyboard action makes for some great noises/effects on the tunes. They played some of my favorites off the new album: “Feels Good Being Somebody,” “EPK” and “Grrrl” (I’ll love you to the end / psyche, I’m just kidding. The best.) And, yes, they played “Starting Five” (duh).

I’m also convinced that the Dios drummer and the Bloc Party drummer were separated at birth. But I’ll have to dig up photos for proof.

On to the photos of the show: 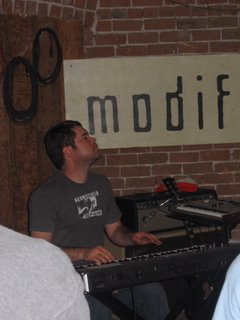