It’s been a few weeks since I’ve done a flashback, and this one is special. The Nonce was probably one of the most criminally overlooked hip-hop acts of the ’90s. For proof, check out All Music’s two-sentence bio on the LA-based duo that also lists the genre as rock.

Plus, there’s a scarcity of information about The Nonce on the net. The Broke BBoys had a nice post about ’em in January, including the hazy details of member Yusef Afloat’s death in May 2000. 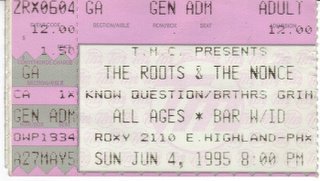 The Nonce opened for the Roots in Phoenix in 1995.
I ate up everything The Nonce put out; sadly their only full-length was World Ultimate, on Rick Rubin’s American Recordings label. Comparisons to A Tribe Called Quest and Digable Planets aren’t entirely off, but not totally accurate either. I think The Nonce’s style was a little more streetwise, evidenced in the single Mix Tapes, about sellin’ mixes on the street corner. That song has one of the deepest, dopest basslines … and that chorus: “I used to sell mix tapes, but now I’m an emcee / I got the rhymes and beats / I used to rock them tapes.” 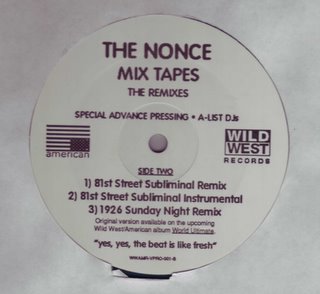 3 thoughts on “Flashback Friday: The Nonce”