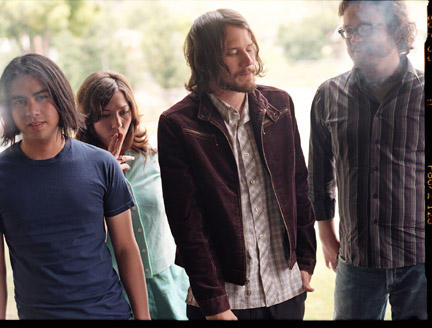 So, the album I’ve been eagerly awaiting, Carnavas from Silversun Pickups, is making its way to mailboxes of bloggers everywhere. Our good friend Dodge has a couple of tracks posted. And I do believe Chris may be posting a track today.

For some reason, I thought I had posted this KEXP set, but it appears I did not. (FYI, KEXP has a blog. Check it out. It’s good.) Anyway, I have posted on Silversun before, and I have a feeling I will again in the future. The band even included my post on the press section of its Web site. I’m flattered, and I’m hoping like hell they make that short jaunt from LA to Phoenix for a show. (Hi, Dangerbird Records. Hint, hint.)

I’ll spare you my ramblings about the fuzzy guitars, shoegaze revival, blah blah. Listen. I also have a KEXP set from Silversun’s performance at SXSW. Requests, anyone?

2 thoughts on “Silversun Pickups on KEXP”