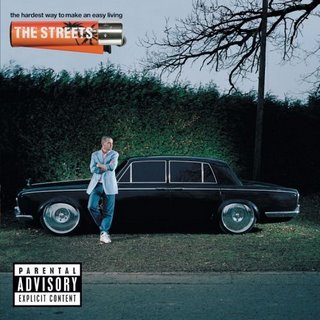 The folks at addVice wanna hook someone up with a copy of the Streets’ new album The Hardest Way to Make an Easy Living on vinyl. And I’m always one to promote the collecting of vinyl. Chris was running a similar contest, so if you didn’t win there, you get another chance.

Before that, anyone have any well-constructed thoughts on the new album? I find myself listening to it in small doses at a time – sort of digesting two or three tracks at a time and then moving on. I’m not sure why. My wife, upon hearing about the first four tracks, thought it sounded like a British musical. (I can just see it: ” … Starring Mike Skinner in the stage version of Oliver Twist … “.)

My initial (and probably hasty) feeling on The Hardest Way is that I’m attracted more to Skinner’s production and beats than his writing and rapping. The title track and Memento Mori are my faves so far.

I think we can all agree that Skinner’s heavy (maybe exaggerated?) British accent gives him a unique voice among hip-hop acts.

About that contest … because I’m a bit uninspired and don’t feel like making anyone jump through hoops, just email me with “The Streets” in the subject line and your address in the body (in case you win) to somuchsilence@gmail.com. A winner will be randomly selected by my wife out of my favorite Cubs hat. Entry deadline is Sunday night.

Now, it’s time to head over to the Vice Records blog for your Streets mp3 fix:

The Streets | When You Wasn’t Famous (Professor Green remix)