For some reason, I’ve had pretty excellent luck lately digging around for vinyl. Last week, I found two different 12″ singles of Persephone’s Bees’ Nice Day with about four remixes of the song (to be posted soon).

Then before the Soul Position show on Wednesday I hit Zia in Tempe. That Zia store keeps 7″ vinyl in crates on the floor (do you see what I do for you?). Anyway, they had a new Raconteurs 7″ single for the acoustic version of Steady, As She Goes b/w (backed with … thanks Eric!) Call it a Day, which is on the forthcoming album Broken Boy Soldiers. Go to this Amazon link for the CD (no, I’m not making any commission on it) and you can also check out streaming video of two tracks live from Irving Plaza in New York. 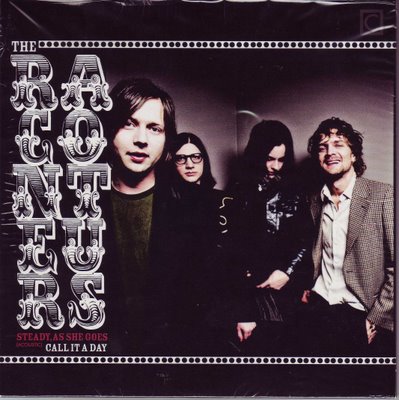 But I have one question: I have the first Steady, As She Goes 7″ which has a letter “A” on the sleeve and the labels of the record. This one has a “C,” which leads me to believe I’m missing “B.” Does anyone have a clue about this lettering system?

Anyway, here’s the acoustic version of Steady, converted from the 7″. This version was the free download last week at iTunes, but Apple puts those files in a straitjacket and handcuffs. Whatever, vinyl sounds better and it’s fresh out of the shrinkwrap, too.

I do like the vibe of this version: a little looser and there’s some laughing (hey, we’re rock stars! this is fun, weeeee!) near the end. Even better, I love the rhythm/tempo change from the verse to the chorus on this version. A little more bluesy.

The Raconteurs | Steady, As She Goes (acoustic)

7 thoughts on “Steady, As She Goes (acoustic version)”