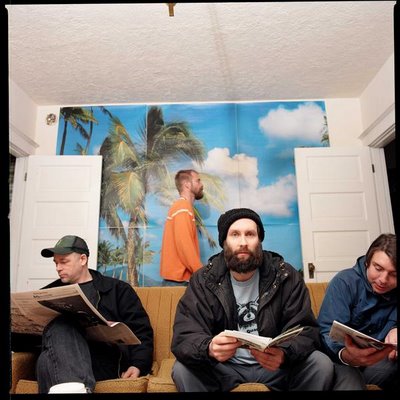 At this point, I don’t need to tell you that Built to Spill’s new album, You In Reverse – the group’s first release in five years – came out April 11. More than any other BtS album, this one has made me think about my … well … lasting relationship with Doug Martsch’s music.

It all started in college (doesn’t it always?). I was living with my brother, who, fortunately for me, has exquisite taste in music. I can’t think of any other album or any other song that so stuck with me in those days on 423 S. Mitchell, Apt. C (oh, the memories), in Tempe, Ariz. For the most part, I liked my hip-hop (Digable, Tribe, you know how we do), and all of a sudden I’m enraptured by these epic guitar jams. Slowly, I was transforming … becoming (gulp) indie. I mostly remember these random weekend days … my bro would go on cleaning binges, the sounds of Perfect From Now On overpowering the vacuum. That was it: I was sold.

Off the top of my head, I can’t think of band whose music has developed such staying power with me. And, frankly, it shouldn’t have happened. I mostly despise long-winded guitar jams (artistic self-indulgence at its worst) and six- to eight-minute songs just aren’t my thing. I can remember a few times seeing BtS live, wondering when those guitar solos might end; and don’t get me started on the Cortez the Killer cover.

Yet Built to Spill’s music spanned those awkward transitional phases of my past decade: college into graduation into what-the-fuck-am-I-doing-working-at-a-newspaper-in-Lubbock-Texas? and, presumably, into adulthood. It’s music that influenced tangible moments.

Better yet, it’s done by a guy, Doug Martsch, who, by all accounts, looks nothing like we imagine (or want) a rock star to look like: balding, beard, beer gut, T-shirt, shorts. Shorts, people! He’s from Boise freaking Idaho (a great city, by the way). He plays pickup basketball (and suffers a detached retina doing so). He’s the rock-and-roll everyman. I trust Doug Martsch. I have more hair than Doug Martsch. (Those two sentence are only slightly related to one another.)

And let’s be honest: His voice isn’t all that great either. Come on, don’t fight me on this. You know it’s true. We like him (and, by association, his band) in part because he looks like one of us. So maybe we can’t play the guitar like he does, but that’s not really the point. At least it isn’t for me.

Besides, lost in those swirly, meandering guitars, is a pretty damn good songwriter. It just takes a little digging to uncover it. Martsch is the type of lyricist I admire the most, his words just cryptic enough so as not to give anything away. He makes you work and concentrate.

Either way, there’s always a certain level of comfort in a Built to Spill album for me, and You In Reverse is no different. As Frank at Chromewaves mentioned, the band isn’t breaking any new ground here. But I’m OK with that. This blog (and others) has opened my eyes to so many bands – some good, some bad, but too many fleeting by nature. A one-off hit/band fad thrills only momentarily; how much do we get out of that? We should appreciate the Built to Spills of this world, who stay by our side and really mean something to us. The rewards are much greater.

Built to Spill | The Wait

8 thoughts on “Why I can’t quit Built to Spill”