Before the music, I have to share with you the coolness that is my wife, Annie. Wanna know what she got me for Valentine’s Day? Tickets to see the National on March 29 at the Troubadour in Los Angeles. Holy hell. The National only landed the top spot on my favorite albums and favorite songs of 2005. And I missed their show with Clap Your Hands in Phoenix because I had to work.

I’m just way too excited. My gift for her isn’t nearly as fabulous. So I can only say thank you and I love you. She knows the way to a man’s heart is with concert tickets. 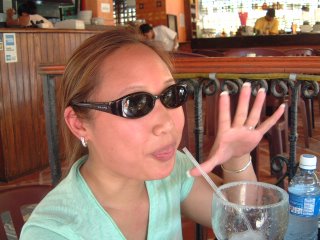 So, all you LA bloggers … that means you and you, and anyone else I might be missing: Let’s rendezvous for drinks, shall we??

Of Montreal is a band I’ve missed twice now in Phoenix in the past year. I tried to go to a show last year on a whim, and that was a mistake. The place was packed, line going out the door and through the parking lot.

So, this set on KCRW is as close as I’m going to get for now, although I think Cable and Tweed is hooking us up with a live set from a recent show in the ATL. I only own Sunlandic Twins, though Matt at YANP tells me Satanic Panic in the Attic is another one to pick up.

(Note: This was recorded from KCRW’s live stream, which comes over at 128 kbps as opposed to the archive audio, which is at 40-something kbps. So the sound should be pretty solid quality. You know, if you’re into that audiophile sorta thing.)

1. Rapture Rapes the Muses
2. So Begins Our Alabee
3. The Repudiated Immortals
4. Wraith Pinned to the Mist and Other Games
5. Oslo in the Summertime/I Was Never Young
(There was a cool bridge between songs that I didn’t wanna chop up.)
6. The Party’s Crashing Us
7. Disconnect the Dots