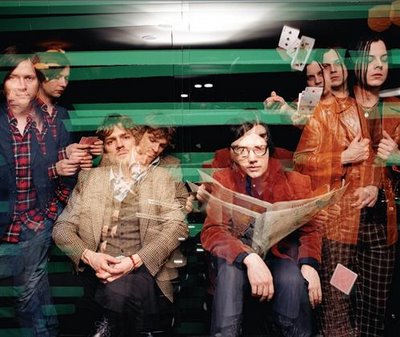 I’m sure I don’t need to tell you this, but what makes Dodge such a cool cat (among other things) is his thorough grasp on all things music and Internet. Yesterday, he introduced us (well, me at least) to AOL’s podcast The Interface, which hosts in-studio sessions/interviews.

Already, The Interface has hosted Editors and The Raconteurs. As is habit around here, I’ve cut up the three songs performed by The Raconteurs for easy digesting. But head over to the site and listen to the interview, in which Jack White reveals he came up with the name after reading an article on Mike Wallace. In said article, Wallace was called a “raconteur” or, as defined by Webster’s online: “a person who excels in telling anecdotes.”

Anyway, it’s a pretty nice set, if not a little stilted. The version of Steady, As She Goes changes tempo from the original and almost feels off-rhythm at points. Still good.

The Raconteurs, on AOL’s The Interface:

10 thoughts on “The Raconteurs on AOL’s The Interface”